Ghoulish Guinea Pig and Kit’s Wilderness featured in my TackleTBR in September, and both MG reads, strangely, feature ghosts. I thoroughly enjoyed both of them, although they are probably at opposite ends of the middle grade reader range. 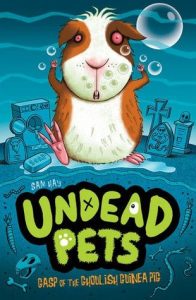 Joe is just an ordinary boy until he makes a wish on a spooky Egyptian amulet. Now he’s the Protector of Undead Pets! This is the seventh book in the spooky but sweet series, telling the story of Flash, a guinea pig who needs Joe’s help to save his litter mates from an escaped snake. The books in the Undead Pets series are full of animal zombies and pets with one last thing to do before they pass to the other side! Funny and full of adventure, this series is ideal for boys and girls seeking a fast-paced and amusing chapter book. [Goodreads]

I found this book in the children’s section of my library last year. It went on my tbr just in case I needed to read it some time. I was hoping that a companion volume, The Zombie Rabbit, might qualify for Z in an Alphabet Challenge. G is no problem, usually.

This chapter book is a very quick read, with many illustrations and large print. The tale is remarkable complex. Pets escape from next door through inter-connecting service pipes, and endanger other species they normally prey on. The ghoulish guinea pig who seeks Joe’s help to get to the afterlife has suffered a fatal mishap involving Joe’s underwear, Mom and the washing machine. That makes the subject entirely suitable for middle graders and tweens, and especially boys.  He alerts Joe to the danger his friends are in. The fast pace and wacky events will appeal to most senses of humour.  I loved it!  I might even read others in the series.  The guinea pigs are also well characterised, as are the boys and girls.  I think Mr Hay must have had a lot of pets in his lifetime!

Great pace and lovely, funny, story. Recommended for kids of all ages, and pet-lovers. 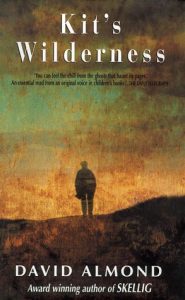 The Watson family moves to Stoneygate, an old coal-mining town, to care for Kit’s recently widowed grandfather. When Kit meets John Askew, another boy whose family has both worked and died in the mines, Askew invites Kit to join him in playing a game called Death. As Kit’s grandfather tells him stories of the mine’s past and the history of the Watson family, Askew takes Kit into the mines, where the boys look to find the childhood ghosts of their long-gone ancestors. Written in haunting, lyrical prose, Kit’s Wilderness examines the bonds of family from one generation to the next, and explores how meaning and beauty can be revealed from the depths of darkness. [Goodreads]

This beautifully written book was one of several I bought at a secondhand shop, David Almond being on my ‘must read’ list.  I was really pleased with the result; I think this is much better than Skellig, although it has a similar set-up.  A young boy has moved to a different part of town; he’s the loner, the outsider.  In Kit’s case things are weird from the start. He discovers his own name on a memorial to children lost in the coalmines a hundred years ago after a pit accident.

The texture of the writing draws you in, in to the poverty that surrounds the mining villages, especially soon after the Thatcher years destroyed the industry. The lifestyle lingers on.  Although Kit is relieved he doesn’t have to go down the mines, he is still drawn to the dark and deadly spaces. His shadow, Askew, urges him on. Askew, the abused son of an abused discarded miner, has his name above the other Kit’s on that same memorial.

The people in the village are wonderful characters; the games the kids play reek of northern soot. I can hear the accents even though Mr Almond rarely writes them.  Wonderful and scary all at the same time, and anyone who has ever been down the mine, on the safety of a tour, will remember their experience vividly, and overlay it with the harshness and loneliness of the deep pits.

Pretty much your last chance to jump onto the Trick-or-Treat Blog Hop if you want to give a book as a treat this Halloween. If you’re a reader, don’t forget to visit this link on October 31st and get yourself some tasty treats this Halloween!