The Narrow Bed was our bookclub’s pick for November. I felt under pressure from all the other books I had to read—but then I realised it would supply the N in my Alphabet Challenge! I wasn’t disappointed—and it was a much more enjoyable read than the one I’d intended 🙂  I’ve seen Sophie Hannah at a number of Norwich Writing Centre events, and somehow my memory of her became the protagonist in this book.  I wonder whether she feels that? 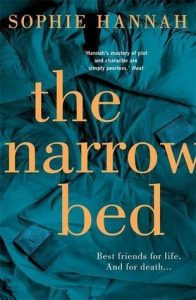 A killer the police have dubbed Billy Dead Mates is killing pairs of best friends, one by one. Just before each murder, he sends his victim a small white book…

Three regional police forces are working together to identify and catch Billy. For five months, they’ve been failing. Then a fifth victim, scared by what she’s seen and heard on the news, comes forward to seek help. Unlike Billy’s first four victims, she isn’t dead. Yet.

Stand-up comedian Kim Tribbeck has one of Billy’s peculiar white books. A stranger gave it to her after a gig she did a year ago. Was he Billy? Now Kim’s life depends on working out why she – a woman who has no close friends because she trusts no one – should attract the attention of the Best Friends Killer… And, if Billy has her in his sights, why has he waited so long to strike? [Goodreads]

It took me a while to warm to Kim Tribbeck, the protagonist in this wonderful crime thriller from Sophie Hannah.  I was a little nervous at jumping into book 10 of a series (Spilling CID) but apart from the inevitable raft of detectives, many of whom I couldn’t remember from one episode to the next, there was little backstory that I needed to know.

The tension is created throughout by the appearance of little white books, the seeming ‘signature’ of the murderer.  Throughout the story, Kim is pondering on the person who gave her a copy, and consequently, the reader is checking all the characters, great and small, for signs of murderous tendencies.  To add to the interest, a particularly rampant feminist journalist comes in at times to write columns complaining about police sexism, murder as a male weapon against women, and a lot of (to my mind) both sensible comment about our male-dominated society and total guff. This was often fun and interesting (I wonder what male readers say?).

The planting of various books into the plot was particularly intriguing.  I followed up one of them, Toni Morrison’s Beloved, and after considerable thought (and reading a lot of the reviews and a few excerpts) decided not to attempt it. If anyone knows of a more accessible Toni Morrison tome (you know I prefer light reading) do recommend it!

Books and the narrow bed itself are both physical and metaphorical items in this story.  I’m sure many of us will have some sort of similar response to both, even if Kim Tribbeck’s experiences (there’s some raunchy sex between these pages) may not be the same as yours.

The author offers us red herrings, then teasingly removes them, leaving you thinking ‘it must be…’, but you know there is always another twist in a Sophie Hannah story. And so there is, in an unexpected way!

I thoroughly enjoyed this book, it was a breath of fresh air among the other things I was doing, and Sophie Hannah writes as well, and as excitingly, as ever.  I had to persuade my bookclub this was nothing like her Hercule Poirot novels, which was all they knew of her.  It’ll be interesting to see their reaction next week!

It’s one of those 4.5 star books, that you wonder why you’re not going all the way—but I suspect it was the density of the feminist propaganda that finally put the nail in the coffin. Highly recommended, even if it’s your first Sophie Hannah read. And although the narrow bed doesn’t play a huge part in the book, it’s a significant atmospheric detail!

4 thoughts on “Book Review | The Narrow Bed by Sophie Hannah”