The Princelings of the North is launched today!

Yes, it’s out on all platforms, for a special book launch price. I hope you enjoy it enough to leave a nice review at your purchase site!

Book 8 of the Princelings of the East series

Lovers of the series will devour this latest adventure, but newcomers may find it best to start with the box set of books 1-3 or book 5; book 7 links to Kevin’s disappearance. This is a mystery adventure in a world not quite like ours, suitable for age 10 and upwards. The series is set to conclude with book 10.

Dylan sighed, and pointed out the lines. “There’s the outline of the island, and the rocky inlet where the boats go in, and the wiggly lines are where the creek goes into the marshes. And there’s an X for where the treasure is buried!” he finished, leaping off the bed. “Oh, why can’t we go now? It might rain tomorrow!”

“It got washed into the tide pool down near the Ensay Burn. I fished it out. It was in a bottle. I saw it glinting green and bobbing about.  I thought it had a stick inside it, but it broke when I dropped it on the way back and I found the paper!”

“But why do you think it’s a treasure map?” Dougall had not yet caught his brother’s enthusiasm.

Dougall thought for a bit. He wasn’t familiar with maps, except of the night sky, since he was one of the star-watching team at the castle.  He didn’t go out of the castle much, except onto the crags above to check the solar cells or the turbine flow. It was Dylan who went all over the island, running messages. He’d been most places.

“Umm, not exactly.  It’s pretty much on the way to Tober Hold, but I usually go a bit further up the glen, and keep to the high ground.  This bit’s all wet.” He pointed to the network of lines he’d described as the creek.

Dylan thought for a bit.  Then he looked at the map again and then at his feet. “There’s ruin on a rock. By the crossroads,” he mumbled.

Dougall looked closer at the map. “Well, nobody’s marked the roads going into and out of the cross. You might still be right. Is it the right place for the crossroads?”

It was Dylan’s turn to study the map closely. “Yes,” he concluded. He stared at it for a moment. “Why would anyone…”

“Mark a cross on a map and not the roads leading up to it?” finished Dougall, his eyes sparkling.  “How long will it take us to get there?”

The little island of Ulva is just to the south of the area where Jemima has placed Castle Haunn, Dylan and Dougall’s home on the Isle of Mull.  The community of North West Mull have the opportunity to buy the island from the current landowner, and use it as a sustainable resource, securing their own futures. Jemima invites everyone to join in her part of the fundraising effort on her JustGiving page, where you can get more details.  Anyone donating on her page will get a copy of a new novella written especially for the appeal, Dylan and the Lights of Ulva, with Jemima’s thanks.

Please help to promote this massive appeal for the small number (in the tens rather than the hundreds) of islanders. 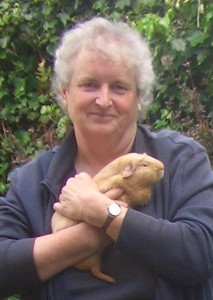 Jemima wrote her first book when she was eight years old. She was heavily into world-building, drawing maps, building railway timetables, and dreaming of being a champion show-jumper, until schoolwork got in the way. Then she went down the science path, writing research papers, manuals and reports, as well as editing the newsletters for her sports clubs. Forty years on she started writing stories about her guinea pigs and their adventures in a fantasy world where everything ran on strawberry juice. Eventually the Princelings of the East took shape, originally intended as a trilogy, but the characters just wouldn’t lie down.  The planned ending will now be with book ten.

Meanwhile, Jemima continues to enjoy the company of new guinea pigs in her home in Norfolk, UK. You can enjoy their blog ‘George’s Guinea Pig World‘.

You can enter the giveaway by using the Rafflecopter.

Giveaway prizes include copies of the new paperback and the ebook of the Box Set internationally, with an extra prize for a UK winner. The raffle runs until 14th February, and is only open to you if your country or state treats this type of raffle as a legal form of gambling.

Book Launch | The Princelings of the North

5 thoughts on “Book Launch | The Princelings of the North”