Dylan and Kevin are two of the protagonists of my new book The Princelings of the North (book 8 of the Princelings of the East series). I thought today I’d take you a little further into the book, helping you to get to know them better.  Dylan is the castle’s messenger, and he often has get over to the other side of the island, to get the messages sent to the mainland. Here he’s decided to take Kevin with him.

Dylan and Kevin take a Trip

Dylan was right; it was an easy journey, and Kevin was fit enough now to move steadily, if not fast. Dylan encouraged him to run down the hills, as long as the ground wasn’t too uneven. He’d teach him how to jump from tussock to tussock another time. They’d been having hard frosts and cold days, so the bogs were firm. Dylan told him stories of sinking in marshes, and Kevin recalled the suck of the mud in the creek when he’d fallen in. He didn’t want to experience that again.

“Do the bogs have bottoms? I mean, if you sank in, would you ever stop?”

“I don’t know. I’ve never been deep enough in one. I’ve seen deer sucked down, though, so they must be very deep—too deep for a deer to push itself out of.”

“Horrible.” Kevin shuddered as he imagined the thick black mud filling his nose and mouth as he sank. He slipped off a tussock onto the crusty mud, which cracked.

“Careful!” Dylan called. “I don’t want to have to pull you out!”

By the time they reached the other coast, the sun had disappeared behind the mountain, Ben More. There was plenty of light to see by, but Dylan encouraged him to hurry. They jogged past the track to Castle Sarlen, which stood proud on the edge of the bay.

“Why don’t the messages come there?” asked Kevin.

“Because they go to Castle Craig. The ferry stops there. Anyway, they’re a funny lot at Sarlen. I try not to let them see me.” 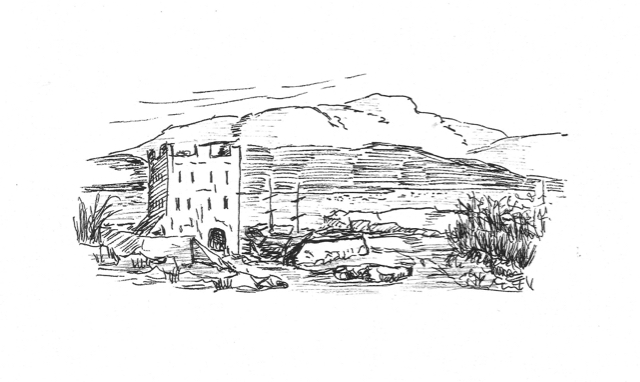 Rose, orange, cream, and violet streaked the sky as Dylan and Kevin reached their destination. Castle Craig was a squarely built block with a few short towers at its corners.

“Ahoy there!” Dylan called at the gates, which were already shut.

A window was pulled back, and two beady eyes looked out. “Oh, hi, Dylan. Who’s your friend?”

“Kevin. He’s staying with us, and I’m showing him the sights.”

They stood while the gate was opened, and Dylan whispered to Kevin, “Best not to attract attention, just keep with me.”

Kevin nodded. He stayed right by Dylan’s side as they went through the gates and on to a message room.

“Ah, good,” said the person inside. “This lot are for you, and this package, too.”

Dylan looked through the messages and put them in his bag. “Can you fit this package in your bag?” he asked handing it to Kevin, who stowed it away. “Have we missed tea?” he asked the message person.

“Aye, high tea was at sunset. I dare say they’ll find you something if you try the kitchen, though.”

Kevin followed Dylan through the corridors to the kitchen, where they got the last of the broth and some carrots. It was filling and warming, and Kevin thanked them kindly, which caused a raised eyebrow from the cook.

“And what part of the world might you be from?” the cook asked.

“Och, that explains it, then.”

She moved off. Dylan finished his carrot, slid a spare roll into his broth, and reached for another for Kevin.

“Thanks, Bridie. If I ever get my own castle, will you be my queen?”

She laughed and carried on cleaning.

“I often say things like that to her,” Dylan whispered. “She knows I’m not serious. Time for a nap before the moon comes up.”

They returned to the gateway, and Dylan took a seat in a small turret at the side. “This window faces east; we’ll see the moon when it rises.”

The moon woke them, but it was later than Dylan expected when they left. The night was clear and crisp. Dylan would have run faster, but Kevin found it hard to be confident in the dark patches of bog, remembering how he’d fallen in the mud earlier. It was dawn by the time they got back to Castle Haunn.

Dylan took Kevin to the deserted message room, where they turned out their bags, leaving the parcel addressed to Hamish and all the messages for the household for the operator when she arrived. “Now for breakfast, then sleep.”

They had just got comfortable when Hamish strode in.

“Dylan!” he roared. “Who has stolen the silver from my parcel and replaced it with a block of wood?”

You can still enter the Launch Giveaway from Monday’s post – or if you are a non-US resident, enter the Goodreads Giveaway.

3 thoughts on “Friday Excerpt: Dylan and Kevin take a trip”