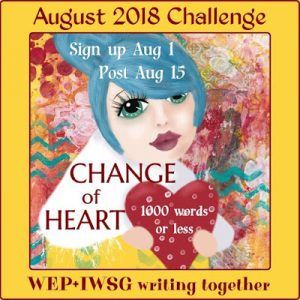 Change of Heart is the prompt for this, my first entry into the linked up WEP+IWSG short story event.  WEP is Write…Edit…Publish, and IWSG is the Insecure Writers Support Group, as you know from myriad first Wednesday of the month posts.

So like my prompts from Chuck Wendig in past years, I’ll now be doing a monthly flash on the third Wednesdays according to the WEP prompt. Actually, they are currently only listed for every other month, but we’ll soon sort that out!

I ran through a number of ideas for ‘change of heart’ and decided to set it in my Viridian System world.  This 980 word flash takes place after book 2, Curved Space to Corsair, and features Dolores, once a slave, now a free woman with her pilot’s licence and backing from Pete and Lars to have her own space taxi business.

“NO! For Sirtis’ sake, I want to go via the Beehive Cluster! What the heck have you done now?”

“The Brahen diversion was faster.”

“Stop!  You took me the way I didn’t want to go for a point three percent improvement?”

Dolores stared at the console in amazement, disgust, frustration and helplessness. Pete said the computer would never override her plans except in an emergency. And for less than an hour’s difference!  If she got too near Brahen space, she knew that Imperium craft would identify her.

“Computer,” she said after a long think. “What is the probability of Senator Kaa Birith’s craft, currently docked at Brahe, identifying us on this new route?”

“And what is the likelihood of us having to take evasive action?”

“By how long will that delay our journey compared with my route via the Beehive Cluster?”

“Between zero and minus three hundred percent.”

“And what is the probability of it being minus three hundred percent, which is three times as long as the route by the Beehive Cluster.”

The computer was not programmed for sarcasm or any other emotions. “Seventyeight point two percent.”

“So you have taken my safe route, which might have taken one hour longer over the course of a month, and put us on one that has a seventy-eight percent chance of delaying us by at least three months.”

Dolores sat in the gentle hum of space. The computer was seriously flawed. It had nowhere near the intelligence of the computer called Wayne, on Lars and Pete’s bigger spaceship.

And it was drawing her into danger.

She recalculated available routes from her current position, set it on one that went near, but not as close to the Beehive Cluster, and locked it in.  The computer confirmed the course change. Dolores watched the console. The craft followed the new course for three minutes before rerouting to its own. 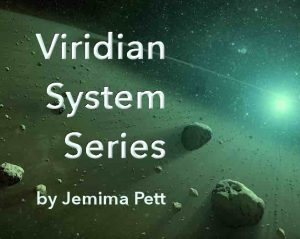 This was only her fifth interstellar trip since getting her pilot’s licence. Pete had come with her on the first two, Lars on the third. Then she’d gone solo, taking a passenger she knew to Brahe, and returning with a consignment of fresh food. She’d recognised an Imperium senator’s craft seeking permission to dock at Brahe’s spaceport as she left, and reported it to Pete and Lars.

“Damn! I thought he was going back to where he belongs via Balkh.” Lars swore a few times. The senator in question, Kaa Birith, had recently purchased a worthless bit of land that Pete and Lars had wanted. He’d bid an outrageous four million credits—for land worth no more than, well, four hundred at the most. Lars knew why, and had revealed his secret to his partners, Pete, Dolores, and Maggie.

“So does that mean we should all treat him as an enemy, as you do?” Maggie had asked.

“Yes. If he knows I care about you guys, he’ll be out to get you as well.”

Alone in her dimly lit sleeping booth, Dolores remembered the conversation. She also remembered all the conversations with Pete about safety in space.  Routines to prevent being boarded by pirates. How to keep your identity hidden, or at least misleading to anyone scanning you. Would they fool a senator in an Imperium craft, looking for Lars and his buddies?  And now the computer was leading her into danger.

Had the computer been bugged?  Was something else controlling it?  It had never changed course in the past. Except in an emergency, and this was no emergency.

What she most wanted was to talk to Pete. She was within range on subspace, but the computer controlled the comms. If she simply spoke to him, the computer would know what was said. If it was under someone else’s control that would be dangerous.

After a few hours partially asleep, she sat up. Memories of coded messages had returned. She started working on an innocent message that could read in an entirely different way to a man with Pete’s intelligence.

It took two days for Pete’s response to arrive. She hoped the computer hadn’t meddled with it, although it seemed to be in clear, so probably not.

“Lars thinks you will remember Wayne’s blue phase. He is preparing a similar picture for you, which can’t wait till you return. Suggest you have a change of heart before blue phase ends.  Lots of love, always. Pete”

Dolores could hardly forget Wayne’s blue phase. The computer on the bigger spaceship had full voice and personality facility; she named him Wayne. An attack by an outside force on their systems had put most of him into shutdown while the rest repaired the ship. But Wayne had done those repairs himself. If Lars was going to put her computer offline in some way, what could she do to solve the problem? ‘Have a change of heart before the blue phase ends’ definitely suggested she had to take action.

She reached for the viewpad, realised that it was integrated with the ship’s database, and checked her qwatch instead. A message from Lars displayed a section from the manufacturer’s manual.

When the systems went down two hours later, Dolores was already sitting in the galley beside the emergency box of manual tools. She used a flat-ended tool to lever open the access panel, inspected it by the light of the wind-up torch, and proceeded to alter the settings on three circuit panels according to the instructions on her qwatch. A bit like an old-fashioned heart transplant, she thought.

Then she waited for the computer’s blue phase to end.

You can find more short stories featuring Dolores, Lars, Pete and Maggie, and the rest of the Viridian world, linked on this flash fiction page on the Viridian system website.