Outside is a book I received from the publisher via Net-galley.  This review reflects my own opinions. Outside will be published on Thursday, 3rd January. I expect it’s going to be a big hit. 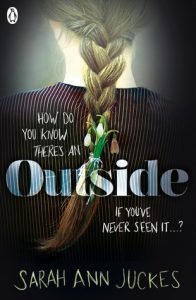 Here’s the thing about being Inside. Ain’t no one believes that they are.

Ele has never been Outside, but she knows it exists – she just has to prove it.

Her whole world is Inside. Trapped with her books and the Others and Him. She has never seen a tree or felt the rain but that’s about to change. Ele’s getting out. For good.

In the spirit of Emma Donoghue’s Room, Outside is a poignant story of strength, friendship and unconditional love, even in the most challenging of circumstances. [net-galley]

The Proof of the Outside follows the story of Ele, who is held captive in a small room by a man known as ‘Him’. Ele is determined to prove there is a world Outside. And when she finds a hole in the wall, the proof starts leaking in. In this dark and compelling debut novel, Ele’s strong and heartbreakingly optimistic voice shines through, revealing an important lesson about the power of stories to save lives.[goodreads]

One of the quotes added to the Net-Galley description above was ‘Impossible to put down – this is a writer to watch.’ from C.J. Skuse.  I agree.

The blurb intrigued me, and the book continues the intrigue.  The reader is continually trying to work out what is going on, who the other people are, where Ele is.  Eventually her location came as a surprise to me.  Then the type of establishment sent changes of ideas through my brain.  The answer was entirely different from both thoughts I’d had.

The book is a conundrum, wrapped in a riddle.  The outcome is an enigma in many ways.  The power of the author’s voice keeps you turning the pages, full of hope for Ele, but full of dread that things could get worse. Even worse.

The writing is so strong, you entwine with Ele’s thoughts and world, and follow her growing understanding of the Rules of Outside, just as you struggled to interpret her life through her Rules of Inside. The people she meets are so well characterised it is really hard to tell whether they are true hearted or not.  Ele herself vacillates.  It is a major achievement to see the world through such eyes, and give voice to others who might find themselves in a similar situation.

Similar situation?  Yes.  The author’s voluntary work with the NSPCC gives the only clue.  For the rest, you’ll have to read the book yourself.  And even though I started comparing it mentally to Pepper’s early life in Closed and Common Orbit, it was nothing like it.

It’s out on Thursday.  Get it.

4 thoughts on “Book Review | Outside by Sarah Ann Juckes”