A Closed and Common Orbit is the second in the Wayfarers series. I read the first, The Long Way to a Small Angry Planet a couple of years back, and have been meaning to read this ever since it was published.  So it ticks a couple of challenge spots off – the Mount TBR challenge and also contributes to the finishing the series challenge.

Long Way was one of my best books of the year in 2016. So I prepared myself for a little let down.  What I found was something that is up there for the best book of 2018.  Coincidentally Long Way was my physical bookclub’s read for the month.  Well, it’s not a coincidence – I took it as a spur to read Closed & Common, which was also the Goodreads Space Opera Group’s monthly read.

A Closed and Common Orbit 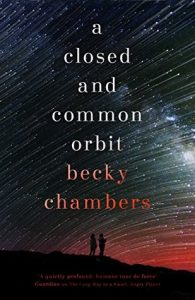 Lovelace was once merely a ship’s artificial intelligence. When she wakes up in an new body, following a total system shut-down and reboot, she has to start over in a synthetic body, in a world where her kind are illegal. She’s never felt so alone.

But she’s not alone, not really. Pepper, one of the engineers who risked life and limb to reinstall Lovelace, is determined to help her adjust to her new world. Because Pepper knows a thing or two about starting over.

Together, Pepper and Lovey will discover that, huge as the galaxy may be, it’s anything but empty. [goodreads]

It’s different, as it’s much smaller in scope than the first in the series. On the plus side, that means there are fewer characters to get my brain around.

The story shifts between Pepper (previously named Jane 23) and Sidra (previously named Lovey) in the present, and Jane in the past.  It’s a study of people and histories, and how people manage in the complex world around them.  But then it all comes together for a most satisfactory climax. The world building continues to be extraordinary.

The thing that blew my mind was the way the author really gets inside the AI’s head. At first when she talked about ‘her kit did’ something, it felt like pernicketyness. But then, the whole thing about being an AI using the kit as a tool, and it not necessarily reacting as she expected, really got me. This is brilliant pyschology, as is Jane’s adaptation to her sudden new world. I felt really emotionally connected to these people all the way through.

A Closed and Common Orbit may not be hard science, but it really is one of the best social science fiction books I’ve read this year.

As I said, my bookclub read A Long Way… this month.  They varied between disliking it and hating it.  One of the members listed a whole load of books she found wonderful that we should read, and I thought, ‘what a waste of my time reading those’.  Maybe I should just give up this bookclub.