The Seagull is the 8th in the Vera novels, and my first.  This is thanks to my bookclub reading them out of order.  If you’ve seen an episode of Vera on TV, you won’t mind a bit, at least, I didn’t.

I remember a Noirwich discussion including the Vera series, but I don’t remember whether Ms Cleeves attended.  It certainly got it on my radar, and I’m really glad I have another long series to add to my TBR and catch up on.  What am I saying? 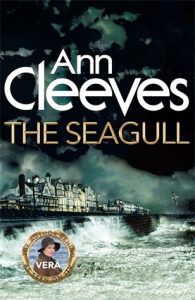 A visit to her local prison brings DI Vera Stanhope face to face with an old enemy: former detective superintendent, and now inmate, John Brace. Brace was convicted of corruption and involvement in the death of a gamekeeper – and Vera played a part in his downfall.

Brace promises Vera information about the disappearance of Robbie Marshall, a notorious wheeler-dealer, if she will look out for his daughter and grandchildren. He tells her that Marshall is dead, his body is buried close to St Mary’s Island in Whitley Bay. However, when a search team investigates, officers find not one skeleton, but two.

This cold case case takes Vera back in time, and very close to home, as Brace and Marshall, along with a mysterious stranger known only as ‘the Prof’, were close friends of Hector, her father. Together, they were ‘the Gang of Four’, and Hector had been one of the last people to see Marshall alive. Vera must confront her prejudices and unwanted memories to dig out the truth, as the past begins to collide dangerously with the present…

The Seagull is Ann Cleeves’ searing new novel, about corruption deep in the heart of a community, and about fragile, and fracturing, family relationships.

One of my fellow bookclub members said this is an excellent read – you can get through it in one weekend.  I’m not sure whether speed as her main criterion for ‘excellent’ but it was all of that and more.  Diving into a series at number eight is not normally to be recommended, but we had sufficient background on the team not to worry, and haveing seen one episode of the wonderful Brenda Blethyn as the title character, I felt ready for the books.

The Seagull is a (imaginary) high-class nightclub on the cliffs at Whitley Bay.  In the depths of my life I had reason to be in north-east England quite a lot, and besides, I worked with enough Geordies to be able to translate into English when necessary. I associate Whitley Bay with nightlife, fun, seaside, excitement, Dire Straits and a few other things.

Ann Cleeves 'takes us back to the glamour of those times, seedy side included, while putting us firmly into the modern day, shabby, tired, forgotten backwater that might have pretensions...' Whitley Bay #northumberland #crime Click To Tweet

What Ann Cleeves does in this book is take us back to the glamour of those times, seedy side included, while putting us firmly into the modern day, shabby, tired, forgotten backwater that might have pretensions to genteel seaside homes if the developers have their way.  That is, if old gangland bodies didn’t turn up in culverts.  The story follows Vera and her team as they painstakingly unravel the evidence, turn over stones with nothing or something nasty underneath, and tackle old technology to retrieve the sort of data they get at the touch of a button from the new.  It’s a wonderful tribute to changing times in attitudes, relationships, and policing, and throws in some interesting background on Vera herself.  I wonder if I’d have known that if I started with book one?

Well, I don’t think it’ll be very long before I find out.  The big question is: to binge-watch Vera on tv, or binge-read the series?

One thought on “Book Review | The Seagull by Ann Cleeves”