Things creep up on me when I’m busy. When the season changes, the urgency shifts.  One minute it’s summer, and I have ages to prepare to launch my book in November, the next minute it’s September, it’s autumn, and there’s only two months to go.  Given how you lovely IWSG members have been suffering my insecurities over the last two Princelings series books all year, I thought I might as well continue to spread some learning, or my panic, in hope others will avoid the stress.

This month we thank our lovely co-hosts for the Insecure Writers Support Group (IWSG):

I’m focusing on the writing, or rather, the rounds of editing that will in the end produce a beautifully crafted story. The deadlines are set for a November 14 release (which is the target, although I have a fall-back date too). The final files need to be uploaded by 4th November for the iTunes, Nook, Kobo and Smashwords releases, and the 11th for Kindle. Last time I did a book launch the Kindle needed to be ready before the others.

Oh, and I need to do the paperback, too. Once the ebook is uploaded it shouldn’t take me too long to set that up.

Since my beta readers have already been hard at work giving me lots of feedback, I think I’ll easily make the end of September for a final draft, since my editor is already working on the documents I’ve updated. She won’t be happy I’ve made further changes she hasn’t cleared, but maybe there’ll be time for her to look over it again. The illustrations can go in after that.

But then I realise… marketing!  That really creeps up on me!

Now I have to decide whether to do giveaways, ARCs, advertising and all that. But my priority is completing the final draft.  And I really wanted to complete two stories I’ve been working on to submit to various calls for anthologies. Maybe I’m trying to do too much – or maybe I should have done them when I first thought of them.

Of course, what I really should have done about two months ago is reread the IWSG guide to Publication and Beyond, to get my brain in gear. But I’ve been too busy writing.

I need a schedule for the launch itself.

The cover is nearly finished.  It’s finished enough for thumbnails to start appearing, but it’s not at the required size for any of the pre-order pages yet. So I’m holding back to do a cover reveal next month.

It’s about time I started recruiting people to do a launch page with me. I’ll put the details needed for a post up on my site again, and ask people to commit to a post in November.  Given the number of other books I know are scheduled for November, not least Rebecca Douglass’s Death by Library, it’s going to be hard to find people willing to take on a ninth in series!

I’ll be doing this in early October. It’s a lovely cover, as you can see from the draft thumbnail. If you’d like to do a post, please leave a comment below and I’ll get back to you with some post material.

Want to join in the launch party?

This should be around 14th November. Next month I’ll have the material for a launch post to send anyone who’d like it, or you’ll be able to copy it from my page here.  You can choose blurb, excerpt, author interview, author bio, character interview, giveaway, links, in any combination you like. Don’t let it creep up on you!

If you could pick one place in the world to sit and write your next story, where would it be and why? 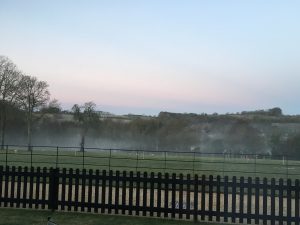 A bungalow in a nice place in Hampshire, backing onto forest or other open space, with the winter sun streaming through my windows and the guinea pigs in their newly reconstructed runs beside me.

Just to complicate all of the rest of this post (and the real reason I’ve missed my submission deadlines) – I’ve sold my house (subject to contract), and I’m house hunting 300 miles away for a new one. Hopefully the right house will creep up on me too. Wish me luck.

#IWSG | Do things creep up on you?