The Essex Serpent first lodged in my mind when Sarah Perry was a guest at either Norfolk & Norwich Festival or Noirwich.  I think it was in NNF on a session on noir, because I’m sure Sarah Waters read her latest book Paying Guests, that evening as well. I remember finding the Essex Serpent more eerie, but my bookclub did Paying Guests a year or so back (I’m afraid I dnf’d it).

But this gives me the chance to plug Noirwich, which is on next week!  The fifth year already.  Unfortunately I couldn’t make it to the opening night which I would have been most interested in, and at the weekend I’m busy with other things.

But I did get around to reading the Essex Serpent at last, thanks to my library bus. 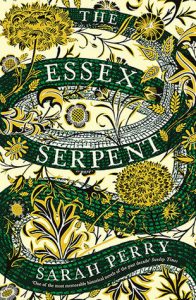 An exquisitely talented young British author makes her American debut with this rapturously acclaimed historical novel, set in late nineteenth-century England, about an intellectually minded young widow, a pious vicar, and a rumored mythical serpent that explores questions about science and religion, skepticism, and faith, independence and love.

When Cora Seaborne’s brilliant, domineering husband dies, she steps into her new life as a widow with as much relief as sadness: her marriage was not a happy one. Wed at nineteen, this woman of exceptional intelligence and curiosity was ill-suited for the role of society wife. Seeking refuge in fresh air and open space in the wake of the funeral, Cora leaves London for a visit to coastal Essex, accompanied by her inquisitive and obsessive eleven-year old son, Francis, and the boy’s nanny, Martha, her fiercely protective friend.

While admiring the sites, Cora learns of an intriguing rumor that has arisen further up the estuary, of a fearsome creature said to roam the marshes claiming human lives. After nearly 300 years, the mythical Essex Serpent is said to have returned, taking the life of a young man on New Year’s Eve. A keen amateur naturalist with no patience for religion or superstition, Cora is immediately enthralled, and certain that what the local people think is a magical sea beast may be a previously undiscovered species. Eager to investigate, she is introduced to local vicar William Ransome. Will, too, is suspicious of the rumors. But unlike Cora, this man of faith is convinced the rumors are caused by moral panic, a flight from true belief.

These seeming opposites who agree on nothing soon find themselves inexorably drawn together and torn apart—an intense relationship that will change both of their lives in ways entirely unexpected. [goodreads]

I’m obviously quoting the US edition of the blurb, but you need to have the context of late nineteenth-century England.

This is a slow starter. The death of her husband introduces us to all Cora’s nearest and dearest in London, some of whom are not really her dearest, although she may be theirs.  The point of view switches from time to time, and I didn’t much care for some of the characters, but they are well drawn.

When Cora escapes to Colchester it takes her a while to travel further, when she delves into the Essex marsh country and discovers a vicar in a ditch.  Well, she doesn’t realise he’s a vicar, since he’s untidily dressed, and rescuing a sheep – not one of his own flock. The story wends its way, with plenty of atmospheric possibilities and fear of the dreaded Essex Serpent rearing its ugly head and carrying off unsuspecting bystanders.

I felt the story improved after a while, even if I still got irritated by some of the characters.  There’s a subplot involving housing in London’s East End, which contrasts with the affluence of the west end.  Whilst Cora’s cronies might have been involved in the housing issue, Cora was not, and I didn’t understand its relevance to the story, unless to provide the friends with a reason for more airtime.

I was a bit worried by Cora at times.  She seemed to resemble, far too much, what I might have been in those days.

I stretched this to a four star review, but as you can tell, I’m lacking in enthusiasm for it. It’s on the literary side, and it’s well written, so I gave it the benefit of the doubt. I’m glad I got a library copy rather than buying it. It’s one I recommended to my bookclub, and a quarter of the way in I was wishing I hadn’t.  By the time I finished it I thought most of the club would like it. Make of that what you will.

3 thoughts on “Book Review | The Essex Serpent by Sarah Perry”