Datura is a weird book. I mean that in a good way – it fits into the subgenre of Fantasy/scifi of ‘weird’.  Leena Krohn is an award-winning Finnish author, but much of the time this story could be set in any big city.  I originally got it in a storybundle, and it’s been lurking on my TBR for 5 years.  So I’ve not only added a K to my Alphabet Challenge, but another to my TBR Mountain, which is looking slightly more achievable now.

Datura also confirms all my prejudices about the plant, which I detest. 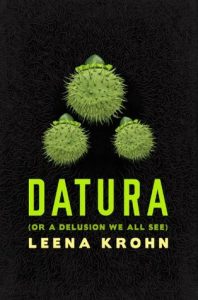 Our narrator works as an editor and writer for a magazine specializing in bringing oddities to light, a job that sends her exploring through a city that becomes by degrees ever less familiar.

From a sunrise of automated cars working in silent precision to a possible vampire, she discovers that reality may not be as logical as you think—and that people are both odder and more ordinary as they might seem. Especially if you’re eating datura seeds. Especially when the legendary Voynich Manuscript is involved.

Where will it all end? Pushed by the mysterious owner of the magazine, our narrator may wind up somewhere very strange indeed. [goodreads]

One of the things about using a newspaper person, whether journalist or editor, in a SFF book, is the storyline opportunities abound. Just as with Claire O’Beara’s Dining Out series, Leena Krohn gets her protagonist into all sorts of situations. Instead of aliens, she has weirdos. Well, people with belief sets that depart considerably from the norm.

Throughout the book, the narrator dabbles in the outputs of the mysterious Datura plant someone has given her.  I hate this plant.  I hate the smell, the sight, and possibly the sound of it, if what one of the weirdos says is true.  Our narrator is fascinated by it, and is sucked into various states which leaves you wondering which of her weirdos is real.  Several events have all the characteristics of hallucinations.  It makes you wonder how much research the author did, and in what depth!

If you’d like a quick dabble in as many astonishing theories as possible in a very readable book, you would do worse than use this as your source.  You might need to double check some of them.  This book is a terrific feat of imagination, and I loved it, despite the occasionally oddities of the translation, or possibly of the Finnish style.

Datura is a funny, weird book, full of wacky theories that just might have some basis in science, but a great story stringing it all together. I might read more from this author.

Leena Krohn's Datura 'is a funny, weird book, full of wacky theories that just might have some basis in science, with a great story stringing it all together.' Click To Tweet
Book Review | Datura by Leena Krohn