Deeplight was offered to me by the publisher (via Netgalley) because I’d previously reviewed The Lie Tree by the same author. So I clicked ‘yes’ because the blurb was so enticing and the author attracts me. It was only afterwards I remembered what I’d said and felt about The Lie Tree!

So, with nerves atingle, I set out to read it. 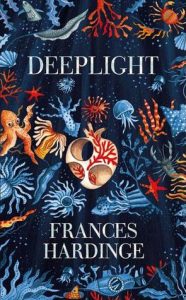 For centuries the gods of the Undersea ruled the islands of the Myriad through awe and terror: they were very real, and very dangerous. Sacrifices were hurled into the waters to appease them, and every boat was painted with pleading eyes to entreat their mercy. They were served, feared and adored. Then, thirty years ago, the gods rose up in madness and tore each other apart.

Now, none remain. The islands have recovered and the people have patched their battered ships and moved on.

On one of these islands live Hark and his best friend Jelt. To them, the gods are nothing but a collection of valuable scraps to be scavenged from the ocean and sold.

But now something is pulsing beneath the waves, calling to someone brave enough to retrieve it. [goodreads]

The further I went with Deeplight, the more inadequate I felt—as a writer. The imagination that Frances Hardinge brings to her world is magnificent in its depth, breadth, description and otherworldiness.

Not only does she invent new aliens, but they are alien gods the like of which you’ve never dreamt before. They are colourful, sensuous, dangerous, vitriolic, and live under the sea, in a breathable fluid that behaves in entirely different ways from seawater. Not only that, but the people left behind on the surface reveal their history through stories told to each other. Stories within stories are a powerful way of bringing the reader into the created world. They are also a lot of work. A lot of work. And difficult to link without stringing them together like an anthology.

Frances Hardinge brings Hark, a young man with dubious friends, to court. There he makes up a story of how he’s ended up there, in a desperate plea for clemency. Luckily for him, someone needs a storyteller to lure the redundant priests into telling their own stories. It could be a new life for Hark, but his friend Jelt, and the people who got him into the court in the first place, have other plans for him.

Like the Lie Tree, there is plenty of interaction between the characters. Jelt is a toxic friend, to put it mildly. I kept telling Hark to ignore him, but Hark of course kept reminding himself of the things Jelt had saved him from—just after he decides to dump him for the things Jelt’s just done. This is so real I took it personally!

Unlike the Lie Tree, I really enjoyed the danger that they walked inexorably into.This is a cracking good story, full of things to exercise your imagination. You admire the writing for its cleverness while never letting it detract from the excitement of the plot.

They gave the Lie Tree a Costa Book Prize. This is MUCH better!