The Future We Choose is about the choices we make now.  What sort of world would they lead to?  If we knew that, we could choose a future that will be worth living.  It’s as simple as that.  Of course it’s not actually simple. It is difficult to change the economic mindset of those who grow rich by ignoring the poverty they create. We are stuck with what has gone before.  If only we’d chosen different paths sooner.

I got this book from Netgalley because saving the planet is something I believe passionately about.  I’ve worked with scenario planning in my former career.  Where we are now is in the worst of what were called the Millennium Scenarios. I hoped that this book might give me some hope, and a stimulus to make the necessary changes in my life.

The Future We Choose 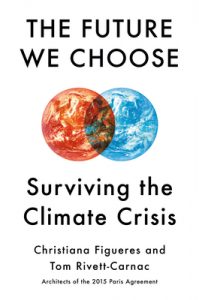 by Christiana Figueres and Tom Rivett-Carnac

Climate change: it is arguably the most urgent and consequential issue humankind has ever faced. How we address it in the next thirty years will determine the kind of world we will live in and will bequeath to our children and to theirs.

In The Future We Choose, Christiana Figueres and Tom Rivett-Carnac–who led negotiations for the United Nations during the historic Paris Agreement of 2015–have written a cautionary but optimistic book about the world’s changing climate and the fate of humanity.
The authors outline two possible scenarios for our planet. In one, they describe what life on Earth will be like by 2050 if we fail to meet the Paris climate targets. In the other, they lay out what it will be like to live in a carbon neutral, regenerative world. They argue for confronting the climate crisis head-on, with determination and optimism. The Future We Choose presents our options and tells us what governments, corporations, and each of us can and must do to fend off disaster.(goodreads)

This excellent book sets out practical ways in which WE (not they) can alleviate the climate crisis and keep global temperature rise to below the critical 1.5 degrees by 2050. It’s OUR choice.

I have conversations most weeks about ‘what can I do?’ Recycling, using the car less, buying locally grown food, all seem to be very small things compared with the magnitude of the effort needed, and who am I among the 8 billion on the planet? What difference can I make?

THE FUTURE WE CHOOSE - practical ways in which WE (not they) can alleviate the climate crisis and keep global temperature rise to below the critical 1.5 degrees by 2050. It’s OUR choice. #thefuturewechoose #climatecrisis #netgalley Click To Tweet

Christiana Figueres has had these conversations at lofty levels, United Nations levels to be precise, with representatives of every nation party to the forum. She gives not only the implications of a choice to act or not act, in her two scenarios for life in 2050, but also insights into the difficulties of getting the Paris Agreement of 2015 agreed.

The situation is: we know what we need to do to achieve these targets. There is very little that is technically a barrier. Socially (and that includes the social side of economic arguments) it is more difficult—getting people to CHOOSE to change their habits and sometimes their belief systems (not religion, most religions believe in moderation and clean living), to stop this planet of ours becoming basically uninhabitable.

mindsets we can adopt

So Figueres sets out the mindsets needed to achieve the changes necessary, and then some more practical steps to halving your carbon emissions.

I find the mindsets very helpful, especially post-Brexit. Start to put in the smaller actions, and I start to see problems… mainly, in how to reach the majority of people to explain these mindsets and persuade them to adopt them. As the authors point out, people tend to read things that confirm their beliefs.

I’m writing from the point of view of someone who has just been battered by the lies and deceit. I might also mention the expenditure of billions of pounds on brainwashing instead of solving urgent problems. I now find it difficult to believe that we can persuade the majority of (English) people that taking any of these steps is in their own interest.

The mindsets give me a set of principles by which to continue to fight for a reasonable future. However, I have little hope that the people who will not read this book will ever be persuaded to act on the contents. I find it equally difficult to believe that Boris Johnson, who has signed the UK up to be zero-emissions by 2050 (which is the target), has any intention of putting in any policies that might get us there. He will say the proud thing, and do exactly what will best fill the pockets of himself and his cronies. The UN has a massive job to persuade its members to act.

So, this is an excellent book, which everyone should read and act on.

You could even decide to change one of your habits a day, or week, in order to take us closer towards a zero-emissions world. Apart from the book’s website wechoosethefuture.com, you could follow Erlijn van Genuchten’s excellent journey on 365 Sustainable Decisions Challenge for ideas that you can do too. Blog your own.

But how are we going to get these messages through to those whose culture is deeply engrained in me, me, me?

I’m sure the United Nations have somebody on the case. Let’s help them. Lobby your government representatives, for a start.

PS When I was working, it was on climate change and carbon emissions reduction targets for 2016 and 2020. [Several of my former colleagues and contacts are mentioned in the acknowledgments). 2050 is almost certainly within your lifetime. This IS in your best interests, but even more so for those of your descendants.

Book Review | The Future We Choose

4 thoughts on “Book Review | The Future We Choose”