The Star Agency is book 1 in the series of the same name by R E Weber. If you find it sounds vaguely familiar it’s because I reviewed book 2 in the series, The Voyages of the Seven, over two years ago! 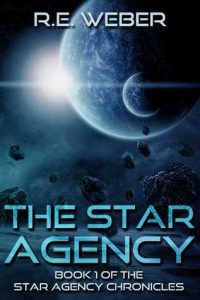 Thirteen-year-old Theopolis James Logan doesn’t much care for his first name, but then that’s the least of his problems. Still in mourning following the death of his beloved grandfather, isolated from many of his friends and bored out of his mind at school, Theo has sunk to a new low that neither his interfering auntie Annie nor his best friend and neighbour Jules can shake him out of.

Then one morning, Theo unexpectedly receives a mysterious parcel containing a newspaper and a cryptic letter and sets out with Jules to unravel its mystery. Following a trail of clues, Theo is led on a startling voyage of discovery into deep space where he discovers that the Universe is stranger, more exciting and more dangerous than he can possibly imagine. Will he have the courage to leave behind everything he has ever known in pursuit of an exciting new life or will his darkest fears triumph, forever putting his dreams out of reach?

Meanwhile, the mysterious Star Agency watches patiently from the shadows, preparing to make its move…

There are lots of very good things about this book.  It’s a science fiction book for age 9 and over (Middle Grade) with lots of excitement. It has a boy protagonist with lots of girls in independent and sometimes superior roles. It has really weird beings from other planets and star system. You’re not supposed to call them aliens, but the author traps himself every now and then. The imagination and the world-building is superb.

It starts off a long long way from science fiction, though. A middlegrader with a low attention span may well get bored before our hero gets taken to the star agency for the first time, let alone after he’s made his mind up to go. Even I double-checked this was the book I thought it was! Once we get off-earth, the author stumbles for a while, describing every step of the way in detail; how every door opens, how the mask attaches itself to his face… I cringed.

I didn’t cringe at the author, I cringed at myself, because one passage was almost identical to the one in my first fiction book (age 20 or so), the one where the well-meaning (hm) friend told me it was rubbish. The one where after that feedback, I believed I couldn’t write fiction.

Well Mr Weber can write fiction. In my opinion it needs improvement, this discovering all about the space station our hero has landed on.  Description is fine, but this goes on for a long time. Well, jarring teen-type banter occasionally breaks in.

Once it gets away from the detail, it’s a great story. Our hero proves himself in a test that goes badly wrong, and he and his mates bond so well they become ‘the Seven.’  It’s great stuff for the age group, and probably deserved its IBD award. I think the second in the series is much better.  But having reread my own books for a pre-audiobook edit just recently, I think a lot of us can say that.

I should also add that the book originally came out in 2013, and I may have had it for several years. So it might have had a revamp.