Moonflower Murders is the second Susan Ryeland Murder Mystery from Anthony Horowitz. I’ve tried not to get too involved with Mr Horowitz’s many series, although I will read the MG one sometimes. There are also James Bond novels and other thrillers. I thought this might be a good taster, and snapped it up when the publisher offered a preview copy via Netgalley. 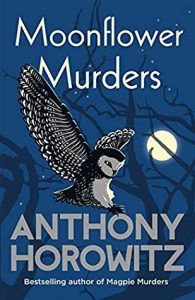 Retired publisher Susan Ryeland is living the good life. She is running a small hotel on a Greek island with her longterm boyfriend Andreas. It should be everything she’s always wanted – but is it? She’s exhausted with the responsibilities of making everything work on an island where nothing ever does, and truth be told she’s beginning to miss her old life in London.

And then a couple – the Trehearnes – come to stay, and the story they tell about an unfortunate murder that took place on the same day and in the same hotel in which their daughter was married, is such a strange and mysterious one that Susan finds herself increasingly fascinated by it. And when the Trehearnes tell her that their daughter is now missing, Susan knows that she must return to London and find out what really happened … [goodreads]

This is an ingenious book. Mr Horowitz is certainly a glutton for punishment, writing two murder mysteries, with plenty of red herrings and twists, in one book.

It starts with former book editor Susan Ryeland wondering if throwing it all up to run a seedy Cretan hotel with her sort-of fiancé is really what she wants. Even if it is compensated by a fabulous view. Then the past interferes. Her bête-noir author, now deceased, has stirred up trouble at a smart Suffolk hotel. Can Susan unravel the riddle that the missing Cecily meant when she read the book and says she knows ‘who dunnit’ after another man confessed?

After meeting all the cast of the Suffolk hotel, all of whom appear to be clichés or cardboard cut-outs (including Susan herself), we are treated to the whole book the author wrote. The one that contains the truth about the murder that took place at thje Moonflower Hotel. Well, no, not the Moonflower hotel, the Suffolk hotel has a Moonflower Suite; it’s the Moonflower Hotel in the book-within-the book.  Apparently the fictional author enjoys puzzles and jokes within his books. The characters are based on the real hotel staff; various other clues are liberally spread about, pointing to who the author thinks did the murder at the Suffolk hotel. Lost yet?

I did what I often do when I’m reading a book I’m finding boring or tedious… I skipped through the Goodreads reviews.  It is obvious that Mr Horowitz has a large fanbase that thrive on such artifices as name anagrams and the like. Some were slightly less enthusiastic, including one that said they struggled through the first third but then it got better.

I struggled through the first two-thirds before I really started to enjoy it. By then the ‘inside’ book had finished, with a clever denouement, but I was continually irritated by the derivative approach. You know something’s wrong if you read a murder mystery and can’t read the sleuth as the German he’s supposed to be. I’ve worked with and have German friends.  I kept sliding into a Belgian accent for him. Even Hare, the DCI, sounded just like Japp. And the secretary Miss Cain, would have done quite well as Miss Lemon. The umlaut on Atticus Pünd’s name irritated me every single time I read it. I have no idea how Mr Horowitz expects us to say it. Did he just not want the average [?] reader to rhyme it with fund?

So, after Ms Ryeland was back and doing her own investigation, she kindly made a table for us listing the characters in the Pünd book with the characters in the Suffolk hotel. It was deathly boring. Maybe some readers like it. It just felt so heavy-handed. ‘Here we are, dear reader, I know I’ve made this very difficult for you, so I’m making it easier with a summary you can refer back to.’ Patronising, that’s the word I’m looking for.

But strangely, after that nadir, it turned around, and became a very good story. Several red herrings were exposed and deposed, earlier hints explained in full, and at last everything came together. I’m just still racking my brain to remember any time I’ve done Norwich to London without stopping at Manningtree, though. Maybe, when there’s no Harwich train to connect to… but not often during daylight hours. Alight at Manningtree for a lovely walk to Flatford Mill, if you’re in the area.

One thing Mr Horowitz got absolutely right: he described going from Norfolk back into Suffolk “when it became a little softer and more welcoming”. We always say that ‘Suffolk is like Norfolk, but better groomed.’

I can’t genuinely say I recommend this. The characters are nowhere near as rounded as those of cosy mystery authors R M Douglass or N A Granger, let alone most of the Noirwich author list. The plot and its twists are no better. By the way, you can stream the Noirwich events this year—Sophie Hannah’s on again, and tackling the ‘writing Poirot’ developments. But Mr Horowitz has done an entertaining job with plenty of complications for those who like their cryptic crosswords in book format. Somehow, from his reputation, I expected it to be better.

One thought on “Book Review | Moonflower Murders by Anthony Horowitz”