A work in progress, the Viridian System series covers books featuring Big Pete and the Swede, orichalcum asteroid miners, as developed in the following flash fiction stories (earliest first). For adults really, and definitely for Curved Space to Corsair.  Plenty of nudity, swearing and booze, but all of it futuristic and mostly in good taste.

As a teaser for book one, there is a Viridian System Sampler containing some of these stories (eight in all) which is sometimes free on Smashwords, and also B&N, Kobo and Apple.

All Big Pete and the Swede want, after a hard season mining orichalcum in the asteroid belt, is a beach, a girl and some good food. Maybe not in that order.  But when an Imperium agent steals one of their girls, and some Pavanians from Bartelski start threatening them, the two men take to their spacecraft to work out what’s happening.

A chase round the galaxy ensues, with kidnap, treachery, mystery and aliens all playing their part in the quest, as both men discover life is not as simple as they had worked so hard to make it.  Will the girls succeed in flying a spaceship? Will the Federation recover the secret weapon?  Will the Imperium infiltrate the Viridian System?  And will Pete’s destiny prove to be the end of the men’s partnership?  Or is that the Swede’s fault for keeping secrets even from his best buddy?

Asteroid miners Big Pete and the Swede deserve a holiday with Maggie and Dolores, but the Delta Quadrant is hardly a vacation spot. Pete has kept secret the call to his home planet, Corsair, to rescue them from disaster. He uses the excuse of Dolores’ training to become a pilot to give give her more space hours, only to send them through a natural wormhole to an uncharted destination. Meanwhile the Imperium declares war on the Federation, while a little personal business by one of the senators leads him off in the direction of the Viridian System to start a canny land grab.

Curved Space to Corsair is the second in the Viridian series, a proposed trilogy. It follows on from the events in The Perihelix, and includes references to events in that book. It’s mean, lean, and occasionally sexy. 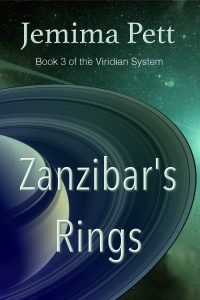 A Galactic crisis: the entire comms system destroyed. No waypoints, no navigation aids, no database access… and how will spaceships in flight get home–or to any destination? Dolores is stuck in warp with a very dangerous passenger, Pete gets his shuttle back home on manual. But how come anything in close contact with pure orichalcum fixes itself? Just flying through Zanzibar’s Rings solves the problem–as the Federation’s fighters find, as they descend on the Viridian System to take possession of the planets.

Zanzibar’s Rings brings the Viridian System series to a conclusion, with a bang and a lot of whimpering. And possibly a view of things to come.

The Perihelix: ebooks at iTunes, Amazon, B&N, Kobo and Smashwords (purchasers can get the second edition upgrade free)

Keep up to date:

Come over and sign up for the latest news!