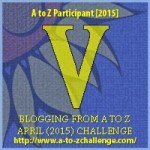 OK, Voyager is not a natural phenomenon.  But it IS phenomenal, and it does fit with my earth sciences theme – because Voyager has left the solar system and gone where no man has gone before.  Well, it did that ages ago, but then came Star Trek – The Motion picture, and when I started this A to Z I wondered: what will become of our little space probe, designed just to fly past Jupiter & Saturn and send back amazing pictures? 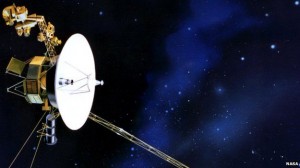 Voyager-1 was launched on 5th September 1972, and sent on a course to explore (at a distance) Jupiter and Saturn.  It not only succeeded, but kept going, and going…

Voyager 2 was launched a few days earlier, designed to catch a gravitational path that would take it past Neptune and Uranus as well.  All the photos of those planets are down to Voyager 2; the rings of Neptune, the amazing colour of Uranus, which has its axis in line with (instead of perpendicular to) the ecliptic – the plane in which all the other planets orbit the sun.  We’ve gained photos and information about the satellites of all these planets too, so that we know so much more about planetary processes.

Voyager 1 left the Solar System on 25th August 2012, and is expected to lose all power within ten years, at which stage it will find its own place among interstellar objects, its momentum carrying it on, and the gravitational pull of any other systems bending its course through space. Voyager 2 is expected to cross the unmarked boundary during 2016.  We will know no more about their amazing journeys. Unless, of course, one gets repaired by aliens, and comes back to Earth to fulfil its self-appointment mission, and tell us everything it has seen and done since it left us!

Read more about the Voyager Program 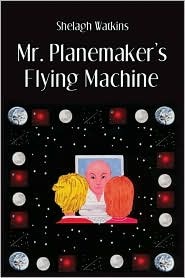 Saturday is book review day, and I’d just like to mention a magical book for older kids and young teens about voyages of discovery, called Mr Planemaker’s Flying Machine, by Shelagh Watkins.

It’s a charming, and slightly odd book, one that I am including in the BookShelf Gargoyle’s Oddity Odyssey Reading Challenge.  Mr Planemaker isn’t well, and has some very funny dreams, and very odd encounters with strangers connected with his computer set-up.  I found these odd enough, in that they seemed to be a presentiment of his own death, which I think was the author’s intention, but this paved the way for an adventure for his children, working their own way through the nightmare that is the quest to grow up sane in this increasingly insane world.

It’s a book that can be read on many levels: a straightforward wacky adventure; an allegory for life; a blueprint for building self-confidence; a guide to the inner workings of the average computer; a mission to discover the wonders of the universe….

It’s a really well-written Middle Grade readers book which many adults will laugh at or learn from.  There are shades of Wrinkle in Time meets the Theater of the Absurd, and I enjoyed it a lot.  Highly recommended.

I got this ebook free in 2012, and it was still free when I checked.  It was worth the wait, and I apologise to the author for the length of time in paying back.

Voyager graphics are NASA via bbc.co.uk

PS  V for Volcanic lightning – check this out http://indefinitelywild.gizmodo.com/an-absolutely-massive-volcano-is-exploding-in-chile-rig-1699735083

9 thoughts on “Voyager – and Mr Planemaker”