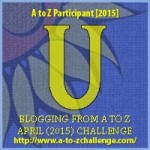 The last Flash Fiction of this year’s A to Z, and I’m trying to build it around the natural phenomenon that brings so much life to our planet, the amazing ocean currents that give us Upwelling.

When I studied oceanography for a year, I think the thing that gave me most fun was ocean circulation.  The currents that provide our coasts with weather, food, and climate are driven by this amazing system that ultimately derives its energy from the sun, but the earth’s rotation has a lot to do with it.

Simplistically, the sun warms the water nearest the equator, and the earth’s rotation moves that warm water west around the oceans.  When it meets a continent, it turns the stream north or south, depending which side of the equator the stream is, and then it flows back east, or rather, north-east or south-east.  That’s basically what forms the Gulf Stream, which keeps the east side of the USA warm in winter, until it leaves the coastline, turns into the North Atlantic Drift, which warms Spain, France and the UK.  We would never have such mild winters if it wasn’t for these warm ocean currents.

But there are deeper currents, including cold ones at much lower depths.  The cold current that comes down the north-east side of the US brings all those ice storms with it.  They eventually go underneath the warm surface currents and cross the oceans until they hit the continent on the eastern sides (of the oceans), when they rise up – upwelling.  And this cold water is full of oxygen, plankton and microscopic life that provides a huge source of food for ocean animals.

So that’s my 250 word summary of ocean circulation, and now here’s my Friday Flash Fiction.  I’ve returned to Chuck Wendig prompts this week, since last week participants posted an ‘awesome’ opening sentence, and this week we get to write a story to go with it. I’d like to thank CrankyAshley for the opening line to this, yet another Pete and The Swede scifi story!  The story’s 950 words this week.  Enjoy 🙂

Pete and the Swede have their own website, btw The Viridian System Series.

A day without fusion is like a day without sunshine, and, unfortunately, Pete and the Swede were running dangerously low on fusion.

They’d run out of sunshine minutes earlier, when they’d hit the water not at the nice glancing edge Pete had calculated, but at a steeper dive.  The pod had gone straight in, and was continuing its trajectory to the bottom, albeit on a slightly refracted path.

“Can I let go yet, do you think?” Lars said through gritted teeth.

Pete glanced away from the console, noted the Swede’s white knuckles on the grabrail, and returned his attention to the readings that flicked through his screen like fireflies in May sunshine. He grunted.

Lars took the grunt as a ‘yes’, and staggered over to his seat, strapping himself into the webbing and thanking whatever gods were with him today that he hadn’t ended up mashed to the floor.  Or the ceiling.  Or smeared around the control deck.  He flicked his own screen and was unsurprised to find the forward view non-operational.  The steep dive through the atmosphere was unintentional, and the heatshield wasn’t built for it.  He tried various other angles and was rewarded with a view of bubbles retreating from them.

“Rear view works,” he said tersely, as they were apt to converse in shorthand when on their own.  It was handy in emergencies.  “H2O, 10% salinity, traces of other soluble metals, organic matter… temperature…”

“I’ve got temperature, density and the rest.  What’s the fuel?”

Lars checked another area of the console.  He coughed.  Or choked.  Or maybe it was a gurgle.

“That’s what I thought.” Pete managed to present an aura of calmness however close they were to calamity.  Lars liked that.  He took strength from it, sighed and tapped a few gauges nonchalantly.

Pete grinned. “Do you want a sitrep?”

“Tell me when we’re stable.”

“Why tell me that? Fracking semeckiss, Pete!”

“I thought you might think of something brilliant if I told you that.”

Lars stared at him.  “Serious?”

Pete’s reply was a momentarily raised eyebrow.  It spoke volumes to Lars.

“Surely we should reach a level where we match buoyancy with the current?”

“Computer, calculate depth where we will match buoyancy with the external medium,” Lars rarely asked the computer such simple calculations, since Pete usually did them in his head.

“That depth is at 1545 metres below surface level.”

Lars double checked the console. “Why…?”

“Too much momentum,” Pete responded to the unasked question.  Their current depth read 2078 metres.

“Have we anything left for an upward thrust?”

“Only if we give up life support.”

Lars and Pete locked gazes. Pete reached for the thruster control.  Not much point hitting the ocean floor with life support operational.

The lights faded to emergency LED as the thrusters took effect.  Their direction changed.  Pete showed Lars the ascent angle and pointed to the time before oxygen levels would become critical.

The thrusters cut out.  They had forty-seven minutes to reach the surface.  Their lives were at the mercy of momentum, buoyancy and ocean circulation.

Twenty minutes in to their death sentence, Pete stopped chewing his thumbnail and reached into a box stowed behind him, drawing out a large map. He gestured at Lars, who took one side of it, and together they spread it out over the dark console.  Pete opened a drawer and grabbed a simple drawing instrument called a pencil and drew some lines indicating their probable point of entry to the ocean, and their probable course now.  Neither man spoke, to conserve oxygen.  Pete wrote “currents?” on the chart.  Lars took the pencil from him and drew some curving lines, some following the line of the continental coasts, some curving upwards from the equator and hooking back towards the east of the planet, others curving down from the equator, but still circulating towards the east.

Pete wrote “cold?” next to one of them, but Lars shook his head and pointed to another.  Pete reached into the drawer again and brought out a semicircular piece of transparent material with dark markings on it.  He lay it on the chart, moved it around the lines he had drawn for their course, and shrugged.

They exchanged glances once again.  Pete held up his hand, and crossed his fingers.  Lars mirrored the gesture.  They sat back in their webbing, closed their eyes, and concentrated on slow breathing.

Twenty-three minutes later, after considerable buffeting, the pod broke the surface of the ocean.  Light streamed in the porthole and Pete slapped the emergency solar panel release switch.  Thirty seconds later there was enough power to release the dorsal airlock.  Both men drew in welcome draughts of fresh air, coughing as their lungs responded to the change in density and release from the poison of their anoxic pod.

The little craft continued to bounce about, occasional splashes of water entering from hatch.

“Fish,” said Pete, pointing out of the side porthole, which gave an excellent underwater view of their companions in the sea.  “Thank you, ocean current, for bringing us into an area of upwelling.  Plenty of rich pickings for them, and life for us.”

“You’re getting over-dramatic in your old age.”

Lars grinned.  Yes.  They had both thought they were goners this time.  They still had to get off-planet, of course.  But they were alive, breathing, and apparently with a source of fresh protein all around them.  Life was good.