UK Swift Awareness Week is 16th to 23rd June 2018.  It’s the initiative of a small but very active group of bird lovers who know swifts are in danger, who set up an organisation called Action For Swifts.

I learned nearly everything in this post on an NWT course at Cley last Saturday. It’s part of my #30DaysWild challenge, but I’m glad the challenge prompted me to go.

Although they have different varieties, people can see swifts in nearly every part of the world.  They are an ancient avian animal, with fossils of very swift-like animals dating from hundreds of million years ago.  It is thought they were already established on Gwondanaland before it broke up to give us the continents we have today.

So while this is a UK ‘week’ I hope most of my readers will increase their awareness of their own birds. 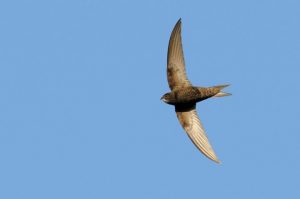 Swift monitoring has only been done in detail for the past twenty or so years.  In that time, the swift population of the UK has dropped dramatically, but even more so according to less detailed survey work done in the 1950s.  Ornithologists estimate that the summer UK population has dropped by 53% since then.

The organisation that classifies birds into levels of danger known as the Red List (it classifies them red, amber, and green) calls them Birds of Conservation Concern.  It lists swifts only as amber, because it requires 25 years of detailed data to list them as red.  We should have 25 years of data in 2020.  The BoCC committee doesn’t sit till 2022, since it only sits every five years.

Yet the International Union for Conservation of Nature (IUCN) categorises creatures on the basis of their decline – and now classes swifts as Critically Endangered. There are only two worse categories to be in: Extinct in the Wild, and Extinct.

Are our Swifts going the way of the Passenger Pigeon?

From tagging with geolocators, we now know much more about where swifts go, and where most losses occur. It’s not on migration, or in their wintering ground in southern Africa.  It’s in the summer, through failing to breed or breeding losses.

Overwhelmingly, the loss of nest sites through fewer hollow tree sites and modern building practices leads to swift decline.  They don’t breed till their third year anyway, and nearly half of each year’s brood will not live that long.  That’s no different from many bird species, and interestingly, the species most like swifts in lifestyle are not swallows and house martins, but puffins and shearwaters, who also spend long periods of time at sea, in the air.

What you can do to help

Just as North Americans saved the purple martin from extinction by mimicking their preferred tree sites with stands of artificial gourds as in the picture, right), we can make a movement for more swift nest sites, on our homes, on our public buildings, and even on new artworks!

I could write another blog post on swift nest box research and design, but your best bet is to check out the Action for Swifts website for their examples. If you have a home with a high point above 3 metres, you might consider making a nest site available to swifts.  Ideally it should not face south, but that can be overcome.  Ideally you could fit the box inside your roof space, with an entry hole flush with the bricks, but you can also fit external boxes.  You can even fit a camera inside and watch the swifts at play and work!

One thing you have to do is make sure your new nest site is not equally attractive to house sparrows, starlings and pigeons. And not having a sparrowhawk or barn owl living locally helps, too.

It’s not as crazy as it sounds.  Action for Swifts worked with Cambridge authorities to commission an artwork that incorporates swift nestboxes.  Read all about it in this 2011 BBC report.  Dick Newell, quoted in that report, was our leader for last Saturday’s course.

Just think how many more swifts there might be if the Angel of the North was converted to hold nestboxes inside them!

Of course there’s lots more to do, like engaging with builders to add “swift brick” nests when they are building those thousands of new homes we need.  That was one of the things on my checklist when I was doing just that in 2000.  What happened to that? Did the Tories throw that out when they threw out the zero carbon homes initiative?

Ask your council to consider swift nest boxes on public buildings. Even on the parapets of carparks!  Swifts don’t seem to be that fussy – they just need height – the more the better, since they practically fall out of the nest to get flying.

#SwiftAwareness and #30dayswild all in one post.  Help spread the word about swift awareness!