Saffron grows in exotic eastern countries, or so I thought.  Our bookclub read for the month suggested it grows perfectly well in Cornwall.  This sounds like an excuse to link my usual Saturday Book Review post with a random act of wildness for #30DaysWild, by eating food from the wild.  First the review, then lunch. 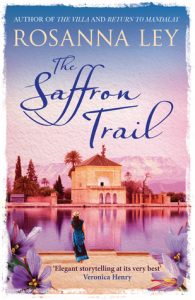 Once, there was a girl who loved saffron. She loved its secrets, its mystery, and best of all, she loved its hint of magic.

After the death of her beloved mother, Nell travels from rural Cornwall to the colour and chaos of Marrakech. Her marriage may be on the rocks, but exploring the heady delights of Moroccan cuisine could help her fulfil her dream of opening her own restaurant.

It’s there she meets Amy – a young photographer trying to unravel the story behind her family’s involvement in the Vietnam War. The two women develop a close friendship and discover a surprising connection between their own pasts.

This connection will take Nell and Amy on a journey to find their own ‘saffron trail’ – from the labyrinthine medina and bustle of Moroccan bazaars all the way back home to Cornwall and to the heart of their families’ origins. [goodreads]

Our bookclub usually has great difficult agreeing on our reads, because our tastes are all so different.  This one was suggested by our librarian, and seemed to hit the spot for all of us, each in different ways.

My first impression of the book was that the language was very descriptive. In some other author’s hands I might have found it too much. Yet somehow it not only went with the atmosphere of mystery about saffron and the people in the story, it made the atmosphere. The author really excelled at painting pictures with words, just as one of the protagonists tells stories with photographs.

The narrative ebbs and flows, with a backstory for a character who is obviously significant intertwined between Nell’s and Amy’s stories.  Or is it Lilian’s?  Many times I found myself certain of the reason, only for doubt to creep in and leave me just thinking about relationships, and time, and the links between saffron and other things.

This book was most unusual for me. It was one I could get absorbed in, then leave for periods of time without losing the plot. I don’t know whether the author instilled some of the Moroccan ‘live in the present’ ethos, which allowed me to cogitate, always looking forward to reading more. Yet the urgency was not there, only a sense of destiny. I didn’t ‘need’ to read on, I would when I had the time to reflect and enjoy.

saffron trail, Was this the power of Ms Ley’s writing?  Was it the subject matter?  I don’t know.  It made me give it five stars, though.  And I’m looking forward to reading more of this author’s work.

I went foraging for some lunch.  It’s too late for wild garlic, but I did quite well in my wildflower garden with wild versions of thyme, oregano, and clover, despite the lack of rain.  I more or less went on the maxim ‘if the guinea pigs eat it, so can I’ so I also treated myself to some dandelion leaves from their specially grown patch in the garden.  I’ve tried grass in the past and reckon its over-rated, but harmless.

I did not, however, pick any nettle tops.  For one, it’s a bit late in the season and they are flowering already, well most of them.  The other is that I made some nettle soup once, and although it was delicious, I was sick as a dog that night and all the next day.  I threw the rest of it out, and vowed never to try it again.

There is something I will try, and that is something I learnt from the book – saffron is grown commercially in Norfolk.  By Norfolk Saffron, no less. So maybe I should try a vegetable tagine made with real saffron, using as many vegetables I can source locally (including from my garden) as possible.

The wild lunch was part of my #30DaysWild challenge. The rest was a happy coincidence that worked for a Saturday book review about food.