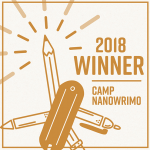 Well, I’m all done for another year!  I’ve ‘won’ Camp NanoWriMo by completing my goal of editing Curved Space to Corsair, in over 80,000 words (88,000 approximately).  And I have the badge to prove it!  I’ve also started work on the last two Princelings books.  Well a girl, has to keep those creative juices flowing, doesn’t she?

Curved Space to Corsair – what next now it’s all done?

Well, of course it isn’t all done. Not yet.  I’m ready to send it to my new external editor, and I hope she’ll be back from her vacation, ready and raring to go, with no other distractions like moving house or anything like that.  Oh, no, she won’t have any distractions at all.  Not!

So when it’s ready to go through again, I’ll tackle her comments and amendments, and get it ready for publication.

I am now ahead of the game, though, because my wonderful cover illustrator Danielle English – who has just opened a new Etsy store, with both prints and originals for sale – has done the lovely dragonfly that I wanted as the cover device.  The Perihelix was on the first book’s cover, and a dragonfly is on the second.

Since it’s also Flashback Friday time today, I’m giving you the first time I thought about how the dragonfly thing might work.  This (fairly long) flash from way back (2015) started as a picture prompt from Chuck Wendig. It is now incorporated into Corsair.

The Alien Among Us

Pete made this announcement after scanning the data from the sensors.  The planet wasn’t mapped, but then the star system was not on any map known to their computer.  The Swede suspected they were either in one of the Delta Zone quadrants, or in an Imperium-sanitised area.  He hadn’t told Pete that alternative.  It could lead to awkwardness, even between best buddies as far back as college.

“Life?” he asked, looking over Pete’s shoulder at the geophysical summary.

Pete tapped a few more screens and sat back.  “Indeterminate.”

“Well, we’re going to have this problem a lot.  The sensors can determine there is abundant oxygen, nitrogen, carbon dioxide and also some methane, and the methane suggests there is some form of life.  But they can’t determine what that life is beyond the vegetable, unless something very kindly shows up in a scan behaving like an animal.”

“So we’re going back a thousand years to when those pioneers landed somewhere and slugged it out if necessary.”

“Neither do I, but if the planet is breathable, which it is with nose filters, since the CO2 mix is high, we need to go down and recharge the purifiers.”

Lars wrinkled his nose.  The purifiers were good, Dolores and Maggie had done wonders coaxing their fledgeling biodome through the trauma of the wormhole, but the imbalances in the system could only get worse.  “How long till we reach critical?”

“I don’t know, Lars.  It’s safe enough now, but I’ve run a few models and even with the factors we know,  there are plenty of unstable projections.  And there’s no way I’ve factored in everything.”

Lars nodded.  They’d all been working hard on survival since they came through an unmapped wormhole a few months ago.  This was the first planet with anything like a habitable profile.  If it took a few more months to find another, they could be in trouble.

“So, landing expedition Plan A, then?”

“Yeah.  You and Maggie.  Watch each other’s backs.  No more than ten minutes outside the pod.  Keep close to it.  Oh, heck, we’ve been over this… you know what to do.” He was familiar with that look of Lars’s, the one that said he was fretting too much.  He’d really rather be snagging a new asteroid plum full of orichalcum ore, risking all the systems dying and the possibility of being blown off it into space, than sitting at the controls, watching his buddy and Maggie go out into the unknown.

Lars’ expression changed.  He punched Pete playfully on the shoulder and left through the hatchway.  A few minutes later Dolores came back through it.

“They’re all kitted up.  I double checked everything.”  Tension showed in her voice, and in her knuckles as she took her place next to Pete at the console.

“Pod to Mother. All sealed up and ready for release.  Check tractor, will you?”

Pete slid his hand over a bar at the top of the console.  “Tractor active, your safety belt is secure.”  He knew it was secure, he’d checked it three times already.  One more time didn’t irritate him, though.  As many times as it took…

“Permission to leave, then?”

“Permission granted, bonvoying.”  The only way he knew the pod had gone was from the minute vibration in the hull.

“So we wait?” Dolores asked.

“Yeah.  Well, not really, I’ll monitor them the whole way and back.  In fact…”  Pete realised he could share the load, and showed her how to monitor Maggie while he focussed on Lars.  It was only watching them, but it was better than nothing.

“How long will it take to recharge the purifier?” she asked after a while, still watching as the pod descended to the chosen landing site.

“Longer than ten minutes, but even that’ll help.  If the place really is safe, we’ll try again for a full recharge.”  Pete pulled at his moustache as he watched the screen.  “Final descent now. We should have them on voice soon.”

He tapped his fingers on the edge of the console.  Dolores looked sideways at him.  She’d never seen him do that before.  We each show our tension in different ways, she thought.

“Pod to Mother.  We have landed, sorta,” came Lars’s voice through the comm.

Lars left the commlink open and they could hear him telling Maggie to double check the atmosphere and fix her breathers while he tried a bounce.  Dolores raised an eyebrow at Pete.  He shrugged.

“OK, Mother, we had a soft landing there.  Very soft.  It’s a boggy surface of some kind even though it reads earth, rock and vegetation.  Maybe it’s peat.”

“What did I do?” asked Pete, bewildered.

The simple misunderstanding made them all giggle.

“OK, I’m on something more solid now.  You okay?” this last was said to Maggie, since Lars’s voice was turned away from the comm. “Talk to Pete for me, would you?”

“Hi, Pete.  God, these breathers are horrid.  Lars is just fixing his then we’ll open the pod.”  Maggie sounded nasal, like she had a head cold.

Pete’s screen changed to a view of a red rocky planet with deep green patches of vegetation and dark holes which appeared to be steaming.  The yellow sky made Pete think of home, but he couldn’t think of a landscape like it otherwise.

“What are those black speckles in the sky?” he asked.

“Yes, I heard him.  I don’t know, Pete, they’ve stayed at half a klick away from us all the way down.”

“I think they’re bigger.  They certainly can fly high.  Let’s get on, get out, and get back.”

Pete and Dolores leaned against each other to get a close-up view of the pod’s view of this strange new world.  A few moments later they got a view of Lars’s leg, then his torso, moving into view. “The ground’s ok,” Lars said.  “Recharging. …  It’s a young world, I think, Pete. Low level volcanic activity, plenty of water with lots of dissolved organic matter. Slimy vegetation, possibly something more like grass in the distance… well, about one hundred metres away.  Odd, the horizon seems quite close.”

Pete’s attention to Lars’ continued description of his surroundings was interrupted by one of sensors – an alert, rather than an alarm.  He slid sideways past Dolores to check the information.

“Lars, the black speckles seem to be grouping like a fighter attack formation.  Still can’t tell what they are but computer warns to avoid them.”

“How far away are they and how long have we been out?”

“You’ve been out four point two seven minutes and they are less than five kilometres away and closing fast.  Suggest you abort and secure pod.”

“Maggie, get back in.  Take this from me, would you.  Turn it off while I’m coming back in.”

Dolores watched as Lars climbed past the viewer.  She spun the view to the direction of the speckles. “Speckles getting much closer,” she warned.

“Pod secure – commence lift off sequence.” Lars sounded calm, unhurried.  “Lifting off.  Brother!” His exclamation coincided with a red alert klaxon sounding in both pod and ship, even if the ship’s was only a buzz.

“What happened?” said Dolores, at the same time as Pete called “Hold tight!” to the pod passengers.

The commlink went down as they went around the far side of the planet.

“What was he seeing? Dolores can you get the last two minutes of the viewer sequence back for me while I track him back?”  Pete was operating four parts of the console at once.

“Are they okay?” she asked.

“Yes, although I think they’ll be off course when they come out of the shadow.  Tractor still standing by… yep.  Hang on…. here they are, yes … eleven degrees out.  Let’s reel them in.”

“Fishing term.  Have I ever taken you fishing?  We must do that some time.”

Dolores shook her head, mostly in disbelief that during what seemed like a crisis to her, Pete was just thinking about some recreation or other.  He was relaxed, alert, and focused on what the controls were telling him.  He spotted her looking at him.

“Will Maggie be scared?”

“Oh.”  Dolores looked dubious, but settled in her seat.

Maggie was extremely anxious, but so relieved to be back on the ship that she fell into the nonchalant security provided by Pete and Lars as they reinstalled the purifier and  tested it out.  Jubilation at the extent of the success of the mission ran to the opening of a pod of wine to celebrate, as they watched the rerun of the flight of some large, colourful, needle-like insect-type life mobbing them. 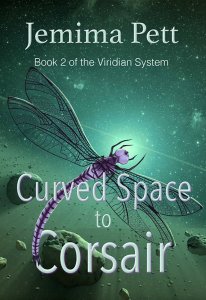 Meanwhile, the interesting animal that had crawled up the leg of the pod on its first landing and continued to crawl into the warmth of the hatchway, now discovered the smell of greenery in the biodome, and crawled its way into that.  It then cogitated a while, considering the change in oxygen levels. Not too bad, considering the anoxic swamp it had survived in so far.  It moved into its final life phase, and recalled the motto given by the rest of its cohort as it had begun its journey.

“May you live in interesting times.”

For Pete, the Swede, Dolores, Maggie, and Thing, life was just about to get even more interesting.

The book cover is still draft!

2 thoughts on “Postcard from Camp 4 | All done! #campnanowinner2018 #flashbackfriday”