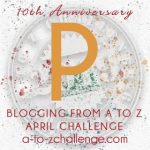 Pickpocket – a 500 word piece written in 2012.  I included it in my A to Z Challenge in 2013 when my theme was ‘stories’.  This year I’m doing flashbacks from my previous seven A2Zs to honour the tenth anniversary of the A to Z April Blogging Challenge.

I hope you enjoy it… as an exercise goes, it’s quite fun! 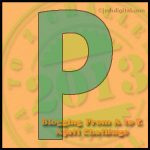 It was a good place to get out of the rain.  I slipped past the lectern which spread itself across the corner, eagle’s wings outstretched.  It looked like it could fly up and perch on the beams in the ceiling. It also looked like a useful dropbox if I needed one before leaving.

A crowd of people entered behind me, shaking off their umbrellas and generally getting in each others’ way.  I mingled with them, spotting the drunk leering at the women and muttering to the men. One daft beggar let himself be accosted by the fish tank with the shark in it.  He reached into his coat, then changed his mind and fished in his trouser pocket to give the drunk some coins. The drunk lurched against me, I lurched against the gent, apologised profusely, and went round the tank, dropping the now empty wallet into the golf buggy parked there.

I made my way to the end where a small boy was sitting on a suitcase eating a piece of Victoria sponge cake. He was gazing at a window as he brushed the crumbs from his mouth.  I followed his gaze – stained glass, 16th Century by the look of it, Noah’s Ark and the Flood. Genesis if I remember rightly. Worth about £160,000, just for the lead.

I bought myself a cuppa and a piece of cake with the generosity of the gent. Three more wallets and a Kindle made their way into my pocket as people carelessly exposed their belongings as they bought their refreshments. An iPhone and a Rolex watch joined them as their owners watched the romantic couple who couldn’t keep their hands off each other.

Thanks, mate, I told the eagle as I left the evidence with him, making my way out through the heavy oak doors and back into the rain.

The 'must include' flash fiction prompt is one of my favourites! P for Pickpocket, a creative writing exercise #atozchallenge2019 #amwriting Click To Tweet

Got all the objects? The characters were the pickpocket (me), the small boy with a heavy suitcase, a drunk, and a woman meeting an illicit lover. The objects were the stained glass window, the fish tank with the shark, a golf buggy, a Victoria sponge and the lectern like the back of an eagle.  I added a few more when doing this blog post, just to give you some more to choose from!

The ‘must include’ flash fiction prompt is one of my favourites!  If you need prompts any time, check out my Flash Fiction Prompt resources in the menu above.

I should remind you that as with 2013, I’m doing a giveaway this month.  Nip over to the post for B, Bravo, and join in to win probably the best set of prizes I’ve ever offered!

P is for Pickpocket – 2013 #atozchallenge

Tagged on: creative writing course    flash fiction    must include    pickpocket