Swashbuckling Cats… is a new anthology from Rhonda Parrish. I hate to say latest, as she’s so prolific, but since it is out this coming week, surely it must be! Already the calls for the next are out, tantalising me with the thoughts of what I might write about. The trouble is, I often get confused with exactly what she’s looking for, partly because she leaves plenty of room for interpretation. So I read most of her anthologies, in order to get a better grip on what I should write.

In this case, I got an answer, but not a very helpful one.

I’d like to thank Rhonda and NetGalley for the opportunity of an advance copy. 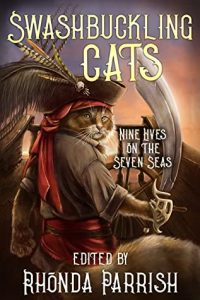 If you think cats and water don’t mix, think again.

Plunge into worlds of piratical cats: on ships, in space, and beyond the veil.

As with all anthologies, this is a mixed bag.  Some took the piratical theme literally, and these were mostly the best of the bunch, or maybe more what I was expecting.

Some were altogether different, featuring cats and boats or somehow adrift in some sort of way. The mix of scifi, general fantasy and pirate fantasy was a good one; it avoided any sense of tedium, and gave some contrast between stories.

Like Equus, and Chris Porteau’s Tails of Dystopia, some of these stories sing long after the book is finished. The first features an animal that is not a cat, trying to make his way back onto the ship he calls home, when all the feline crew think he deserted them. It’s a sparkling opener, and made me want to read more from the author, Megan Fennell. Confusingly, though, several authors had named their protagonist Kit. The editor did well to space them out a bit, but it still gave the brain a wrench.

Brilliant ideas abounded. Mixing pirates with time travel and Norse mythology. Getting stuck in some sort of Jumanji-like book. Near the end were two I particularly enjoyed, with a cat seeking to retire to a desert island that just happens to be the legendary store for another pirate’s hoard… and a retired court Sabre (some sort of Musketeer, as I interpreted it), drawn into a final sortie to save her village.  But the first three were the most scintillating, and deserved their place at the beginning.  There’s a little padding in the middle (although one I remember as it was so different), but with anthologies, you never know what’s going to float your boat, and you never know what’s going to come up next.

Provided you aren’t allergic to cats, pirates or boats, you’ll love this book! Hmm. I think that’ll scare off three of my favourite people…

One thought on “Book Review | Swashbuckling Cats: Nine Lives on the Seven Seas”