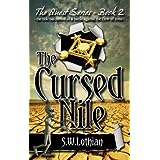 The second book in the Quest series sees our heroes JJ, Linc and Rani summoned back to Ancient Egypt to solve the riddle of the disappearance of the Water-God Hapi, along with the waters of the Nile.  What the top god Horus doesn’t know is that in modern day Egypt, the Nile waters have also disappeared.  Thus we are set for a time-travelling puzzle that bounces from ancient to modern mixing real landmarks and delightful inventions to produce a beautifully described, heartwarming, exciting adventure.

Of course it always helps when you have had the luck to visit the setting for a book, and this one resonates more than most, since the river island of Zamalek, a key setting in the book, is also the place where my parents lived when they were first married, and I was tasked with looking for their flat by my father when I visited Cairo about ten years ago.  I didn’t find it, but I explored the island fairly well.  So I really enjoyed the parts of the story set on the island, and the race to get to the Great Sphinx not so very far away at Giza.

Mr Lothian’s attention to detail in describing the Nile and its islands bring the whole setting to life – including the dry riverbed.  I loved the exploration of an island where some statues had taken refuge as a sort of commune.  Statues  had their movement enabled thanks to the trio’s earlier exploits, and this group found pressures of ‘modern’ life all too much to bear.  But they are pressed into service, and once more Mr Lothian’s superb descriptive skills capture the imagination as the statues and the trio approach their enemy.

It’s a pacy, thought-provoking adventure, a jewel in the raft of middle grade time travel books, and to my mind the best of the Quest so far. And there’s no trouble with reading them out of order, either.  I’m looking forward to number 4!

I received a free ecopy of this book from the author in return for my honest review.  Read as part of the YA and MG Time Travel Challenge.  Part of the Kid Lit Blog Hop.