They say it takes two to tango, but then it takes two for most other ballroom dances!  Tango is T in the NATO phonetic alphabet of course, and if you didn’t know that is my theme for the A to Z Challenge, well – thanks for finding me before the end of the month! 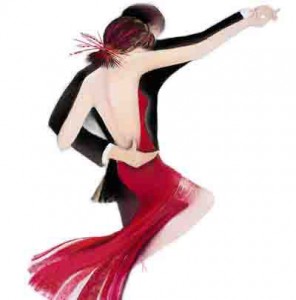 Piazzolla is undoubtedly the master of the Tango, and his ‘Libertango’ (a portmanteau that incorporates ‘Libertad’ and ‘Tango’) is one of the most performed of his works. Spicy rhythms and a fiendish melody have kept this one at the forefront of modern Tango, with countless brilliant interpretations to explore.

Listening to it on the radio in the morning almost gets me dancing around my kitchen.  But as it takes two to tango, I’ve invited my friend and co-minion in Damyanti’s AtoZ Challenge team, Guilie Castillo-Oriard, to tell you all about her tango experience.  Take it away Guilie!

When I moved to Curaçao ten years ago, I was surprised to see so many people dancing–salsa, merengue, something called bachata that I’d never heard of. And the friends I was making, especially the Dutch ones, were very surprised that I couldn’t dance any of this.

People don’t dance in Mexico. Some cumbia, maybe–if you’re lucky. And I couldn’t even dance that. The only thing I could dance back then was swing–and who dances that nowadays?–and the tango. Not that I told anyone. Who’d want to know, first, and second, who’d want, or be able to, dance it?

I learned to tango in my grandmother’s kitchen. She and my grandfather used to perform exhibition tango back in the 40’s, the heyday of this Argentinian dance in Mexico, when it was still considered risqué and avant-garde, and not a relic.

My grandparents divorced the year my mother got married. Through some quirk of the divorce settlement, instead of selling the land they owned, or one of them buying out the other, they split the property in half and became next-door neighbors–which they were until my grandfather died.

They were only separated by a three-meter-high wall and, perhaps more powerfully, all the resentment built over forty-five years of marriage, but, physical proximity notwithstanding, they never saw each other again. Not once.

And so, among the pans of steaming rice and clay pots of delicately scented stews, my cousin–two years older–and I learned the basic steps of the tango amid riveting stories of what, for us, was a different era. And along with the steps, perhaps less obviously, we learned about the fragility of love, the cancer of resentment, the price of betrayal.

The tango is a passionate dance. Not just sexually passionate, but emotionally, too. It makes sense that I learned it from someone who lived an epic love story–with the heartbreak to match.

Would you like to see the tango in action?  Here’s a video from my tango instructor friend here in Curaçao.

Guilie is a Mexican writer currently exiled in the island of Curaçao. She misses Mexican food and Mexican amabilidad, but the beaches and cultural diversity of the Caribbean are fair exchange.  She’s currently editing her first novel, and participating in an awesome year-long project with Pure Slush Books, 2014: A Year In Stories (http://pureslush.webs.com/2014.htm). She blogs at Life In Dogs (http://lifeindogs.blogspot.com/) about dog rescuing and at Quiet Laughter (http://guilie-castillo-oriard.blogspot.com/) about everything else.

T for Tango – it takes two?