I’m very pleased to include a book review of City of Gold on Carolyn Arnold’s Blog Tour today, with thanks to Lori at Escape with Dollycas for doing all the work!

What you get is a near-perfect mix…heart-pounding escapades and near-misses, balanced by moments of – if not levity, at least a temporary release of the pressure cooker.
~Back Porchervations 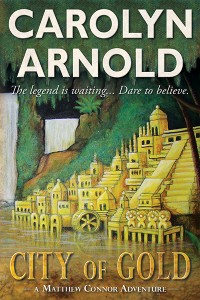 Action-adventure books for the mystery lover. In this series, modern-day archaeologist and adventurer Matthew Connor travels the globe with his two closest friends to unearth treasure and discover legends the world has all but forgotten. Indiana Jones meets the twenty-first century.

Archaeologist Matthew Connor and his friends Cal and Robyn are finally home after a dangerous retrieval expedition in India.  Now Matthew and his two closest friends have to find a city and a treasure that have been lost for centuries. And they only have seven days to do it. As they race against the clock, they quickly discover that the streets they seek aren’t actually paved with gold, but with blood.

Finding the Inca’s lost City of Gold would be the discovery of a lifetime. But failing could mean Cal’s girlfriend’s death…

This is a very good, intriguing adventure mystery of a search through the Bolivian jungle for the lost Inca City of Gold, mashed up with a pretty darn good police procedural, and swept up with the background of a youngish man hiding his adventurous occupation from his rich politically-engaged father.  There is plenty of action, double-dealing, about-turns and femmes fatales to sweep you along in search of the next dastardly bit of plot.  The jungle pieces and visualisation of the Lost City, and the prologue of the adventure that sets the whole thing in train (see excerpt below), are pacily written, with rich descriptions and entertainingly introduced bugs, crawlies and things that go bite in the night.

The set-up in the world of the super-rich where everyone is incredibly glamorous will appeal to many, and there are plenty of interpersonal tensions to create some really good three-dimensional characters.  However I found myself increasingly irritated by the emphasis on long expositions or narrative dialogue with the speaker explaining his (or her) inner turmoil.  We get told far too often how the speaker feels, and why, when he makes a statement.  We knew that he felt that way three chapters ago, and we didn’t expect him to stop feeling that way after three days. The pace of the Bolivian adventure is interspersed by the peace and quiet back home, where the father is slowly becoming suspicious, slowly being the operative word.  For me the contrast in pace was a jarring note, and although these were short interludes, it was a huge relief to get back to the action.  When the police finally get involved, their actions are well handled, although again, too much telling us why people think what they do, and emphasis on unnecessary elements of the relationships between minor characters does nothing to make them three-dimensional.  That said, I did receive an ARC, which has a statement in it that it is not the final work and may contain typos.  It does, and I’m sure they will be corrected.  I think it could do with a good edit, though!  This could be a theme of my reviews this spring, and apologies to all the authors who get that comment (see my review of Self-editing for Fiction Writers).

It’s a worthwhile read, and ideal for holidays and long train journeys, where some exciting escapism coupled with some good detective work is just the ticket.  Very enjoyable, and the City of Gold itself does not disappoint.

Excerpt from City of Gold, Prologue

Most of their pursuers were yelling in Hindi, but one voice came through in English. He was clearly the one giving directions, and from his accent, Matthew guessed he was American, possibly from one of the northern states.

“I have to stop…and…breathe.” Robyn held a hand to her chest.

“We stop and we’re dead. Keep moving.” Cal reached for her arm and yanked.

Matthew slowed his pace slightly. “Robyn, you could always get on Cal’s back.”

“What?” Cal lowered the arm that was holding the GPS.

She angled her head toward Matthew. “If you think I’m going to get up there like some child, you are sorely mistaken.”

Matthew laughed but stopped abruptly, his body following suit and coming to a quick halt. He was teetering on the edge of a cliff that was several stories high, looking straight down into a violent pool of rushing water. He lifted his gaze to an upstream waterfall that fed into the basin.

Cal caught Matthew’s backpack just in time and pulled him back to solid ground.

The rush of adrenaline made Matthew dizzy. He bent over, braced his hands on his knees, and tucked his head between his legs. He’d just come way too close to never reaching his twenty-ninth birthday.

More bullets fired over the empty space of the gorge.

Matthew forced himself to straighten to a stand. He hadn’t brought them all the way here to die. He’d come to retrieve a priceless artifact, and by all means, it was going to get back to Canada. He pulled off his sack, quickly assessed the condition of the zippers, and shrugged it back on. He tightened the straps, looking quickly at Cal and then at Robyn. One stood to each side of him. He had to act before he lost the courage. He put his arms out behind them.

Robyn’s eyes widened. “What are you doing, Matt? You can’t honestly be thinking of—”

Matthew wasn’t a religious man, but he was praying for them on the way down. 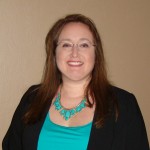 Carolyn Arnold is the international best-selling and award-winning author of the Madison Knight, Brandon Fisher, and McKinley Mystery series. She is the only author with POLICE PROCEDURALS RESPECTED BY LAW ENFORCEMENT.™

Carolyn was born in a small town, but that doesn’t keep her from dreaming big. And on par with her large dreams is her overactive imagination that conjures up killers and cases to solve. She currently lives in a city near Toronto with her husband and two beagles, Max and Chelsea. She is also a member of Crime Writers of Canada.

And don’t forget to sign up for her newsletter for up-to-date information on release and special offers at http://carolynarnold.net/newsletters.

4 thoughts on “Book Review | City of Gold by Carolyn Arnold”