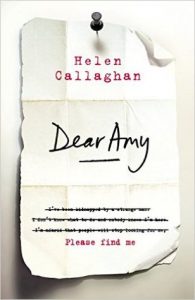 This is the first book I’ve got of my own accord through Net-Galley.  A few came that way as a result of blog tours, but I picked this one out of the Net-Galley list and I wasn’t disappointed.  It was one of my Clean Sweep Challenge reads.

Dear Amy is a first novel by Helen Callaghan, and it deals with child abduction in East Anglia.  For non-UK readers, there was a notorious child abduction in Fenland over ten years ago now (how can it be that long, it seems like yesterday), which gave rise to a number of new child protection laws and procedures.  The girls and their abductor lived in Soham, a small village, so references to the Soham children, or murders, arise from that.

What I was certain of as this story unfolded was: there had been a new child abduction, a teenager; there had been a very similar abduction some ten or more years earlier, which had never been completely solved i.e. no dead body, but evidence that suggested one might be buried in the marshes; the protagonist and narrator of the book, Margot Lewis, has a lot of personal problems, but she’s battling on against them and life in general.  She’s a school-teacher, anxious about her students, and the pits that are our current educational system, and she does a weekly Agony Aunt column in her local paper, under the name of Dear Amy.  There is an interest (who might become a love interest) who does academic research into missing children.

The great strength of this book is that while the facts are there, you are never entirely sure of what really is a fact, because as Margot presents the tale, she starts to doubt herself, and thus you doubt yourself, too.  As unreliable narrators go, Margot’s a good one.  Even when you start to realise what exactly is going on, there are still elements of doubt – have you read too much into it?  Are trustworthy people just good actors? With the occasional addition of a first-person narrative from the currently-abducted child, this keeps you on your toes, if not the edge of your seat.  There was one point when I got terribly anxious that the silly person was going to do entirely the wrong thing….

A first-class psychological thriller that I really couldn’t put down. One of those books that leaves you wanting more… and sitting thinking for an hour afterwards. Not for people with personality disorders.  I might even read it again, which makes it a definite five stars from me.

Dear Amy came out as probably my top read of 2016.