Equus was a book I received from LibraryThing, as part of their first reads initiative. It is nothing to do with Equus the play. But it is Latin for ‘horse’. 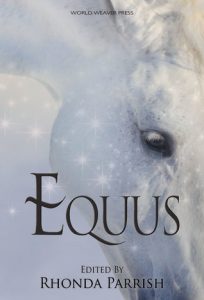 There’s always something magical about horses, isn’t there? Whether winged or at home in the water, mechanical or mythological, the equines that gallop through these pages span the fantasy spectrum. In one story a woman knits her way up to the stars and in another Loki’s descendant grapples with bizarre transformations while fighting for their life. A woman races on a unique horse to save herself from servitude, while a man rides a chariot through the stars to reclaim his self-worth. From steampunk-inspired stories and tales that brush up against horror to straight-up fantasy, one theme connects them all: freedom.

Oh… horses.  A whole book of them.  Well some are horse-like creatures, but… This is a set of really good stories, and some of them are brilliant.  Early on I was wondering whether a whole book of short stories would be interesting enough, but the variety in this volume was astounding.  The stories were outstanding.  Just as I thought, ‘this one, this is the best of the lot’ along came another to vie for supremacy.

Clearly, every author has had a personal relationship with at least one horse.  The detail of horse movement, the quiver of the wither, the softness of the muzzle, the tickle of the whiskers… the side-eye (something a lot of animals give you – it’s a very disapproving look).  Some of the stories offered verbal (or telepathic) communication, others left it to the unspoken wishes and understanding between partners.  The writing was at once descriptive, and vibrant.  Nobody got bogged down in detail, and all grabbed your attention and kept you there.  Most involved you right into the sights and smells of their world.

I think my most memorable was the dystopian rider, partnering not only her horse to get messages through. Even though the horse feared the augmented humans who they rode alongside, the development of the alien attack and the ride through the devastated London was astoundingly dynamic, frantic, and real. There could be a huge development of that scenario, and I hope I’ll be reviewing a full-length novel drawn from it at some stage.

If you like horses, Equus is a must.  For other fantasy/dystopia/mythology admirers – enjoy it.  I gave it five stars with no hesitation – and that’s a great compliment to the editor.

Here my second progress report on #TackleTBR2017. I’ve been a bit busy this week.

Finished books: A Siege of Bitterns by Steve Burrows

You can read comments on books finished (and see their covers) on my Goals post from Monday.