Five things in my writing space… that’s the topic this month for the Insecure Writers’ Support Group post.

At the same time, we were reminded to stick to writing matters rather than wholly unrelated things. That’s fair enough.  It’s just that things in my writing space include my guinea pigs! 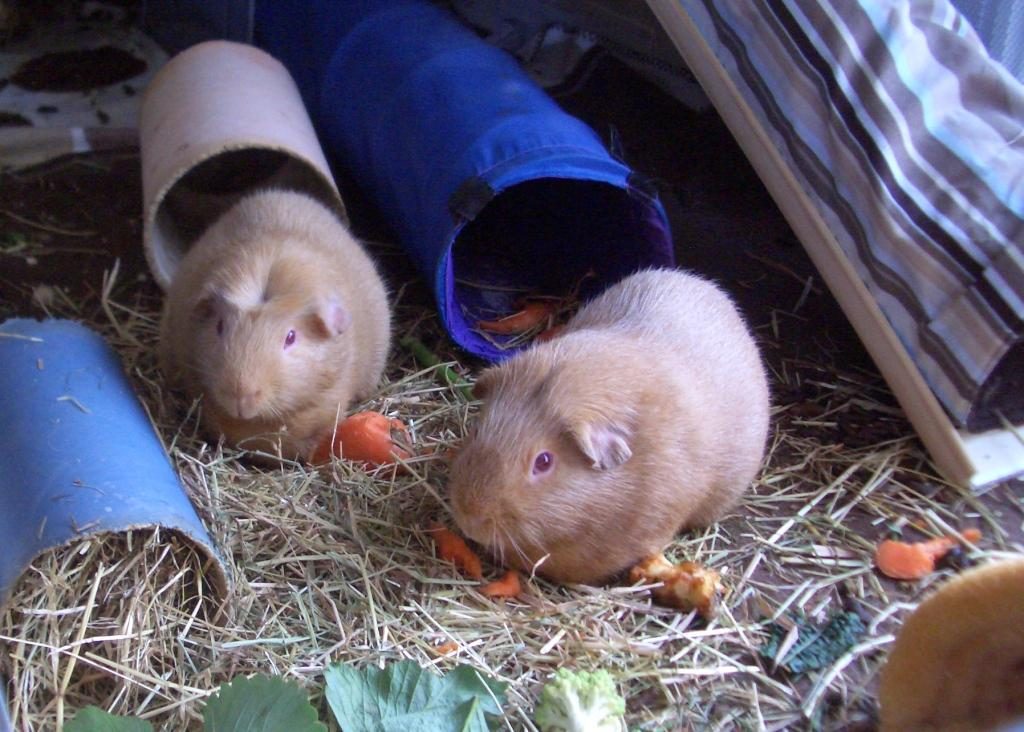 Cue perfect picture of Fred and George, the boys who set me off on my writing path.  They are the stars of The Princelings of the East (and most of the series).

Five things in my writing space

This lovely space was designed by engineer George (guinea pig) who designs planes in the books.  I put it together.  When I first got Fred and George, and then Victor and Hugo, they lived in the kitchen downstairs. I felt rather lonely up in my writing space. This was the solution. Fred and George came upstairs during the day, and I wrote their stories.

Eventually I got more guinea pigs. Some of them fell out with each other, and the run became a permanent cage (split into two) for various combinations.  I think ‘Lord’ Colman and his ‘nephew’ Kevin were the first to live here permanently.  Colman got to be Lord of Deeping, definitely a baddie, books 5 to 8.  Kevin moved from spoilt brat and possible baddie in 5 to wronged heir in search of his inheritance in book 8.  He’s a complex character in books 9 and 10, and I’m not sure whether his reform will help or hinder King Fred’s plans in the end. 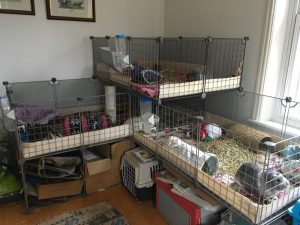 Then Dylan and Dougall came and lived here; they are the Princelings of the North (book 8) and also star in short stories of life on the Isle of Mull. Fred, George, Victor and Hugo all went there, but Dylan and Dougall never made it. Dylan and Dougall swapped places with Percy and Midge: Percy has a role in the books which he got before I got him, strangely enough; I mention Midge, along with his brother Oscar, but they may not get a starring role.

Just a few weeks ago I set it up so the current boys, Bertie, Biggles, Roscoe and Neville are up here permanently during the winter.  I really missed having the company over the summer after Percy and Midge passed on.  Apart from generally talking to them, I read them bits when I’m editing. If they get bored I know I’ve got to improve it!  I expect they’ll creep into the books somehow.

On my left is a pile of the paperbacks I’ve written.  Despite being very good with my style sheet, I sometimes get to a point when writing when I want to check who did what with whom previously in the series.  It’s much easier to flick through the books than to open up the efile and search. That’s partly because I’ve moved from a PC to a Mac since I started writing them, though.

On my right is my Concise Oxford Dictionary, and, mainly used when editing, the Oxford Dictionary of Synonyms and Antonyms, and Self-editing for Fiction Writers by Browne and King, which is worth its weight in gold.

3. Picture of a racehorse 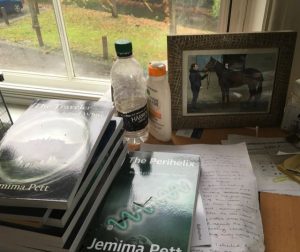 This is Marvel, who is a very lucky horse indeed.  He’s the son of one of my racing club’s mares (I pay around £100 a year to belong to this club, and get a colour magazine every two weeks with updates about all twenty or so horses).  He had an accident as a foal when he was probably kicked in the head by another foal: he had horrific skull and jaw injuries. They thought they’d need to put him down straight away, but the vet suggested they saw how he was in the morning.  He survived that, grew out of his head tilt, and went to be trained.  Then he seemed to have a permanent lameness.  That improved over the summer and now he’s in training, and likely to run in the coming spring.

As an inspiration for writing, he’s brilliant.  That’s my excuse for having his picture there, anyway.

I should drink more water, especially when I’m sitting here tapping away. If I have a bottle with me, I might just take a swig from time to time.

Why the suntan lotion is there I have no idea.

There’s also a piece of paper sticking out from the books. It records a dream I had one time I was away, which I wrote it down for a future story.  It’s still a future story… 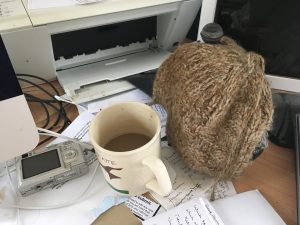 I have one cafetiere of coffee (about one and a half cups) in the morning (after the one with breakfast), then it’s tea all the way after that.  I had a night where I couldn’t sleep last Sunday, and realised it was because I’d had four cups of coffee before driving home from the folks I’d seen at the weekend.

Does it help me write?  Maybe not, but I like the taste, and it makes me stop typing and encourages me to stretch my neck and arms!

How about you? What five things have you got in your writing space?

One of the most important parts of the monthly IWSG post is the visiting.  I apologise to everyone I haven’t visited recently, mainly because of problems I had with Privacy Settings and Safari, but hopefully I’m over them now and can get over to see you!

If you want to join in, and get all the support from this wonderful bunch of writing blogging people, plus hints and tips from the website, go here and sign up!

24 thoughts on “#IWSG | Five things in my writing space”