We reach the final week of the A to Z Challenge, and today I’m delighted to welcome Vidya Sury, one of my co-minions on #TeamDamyanti.  As well as her minioning, Vidya has been running the challenge on two blogs – an amazing achievement!  Spotting that one of those was medical in nature, I thought she would be the ideal person to cover the NATO Alphabet word for X – X-ray!

Perhaps one of the greatest inventions in medical history, from renowned German physicist Wilhelm Conrad Roentgen.

X-rays are a type of electromagnetic radiation similar to radio waves, microwaves, visible light and ultraviolet, all of which travel as waves at different wavelengths.

Let’s first talk about the inventor of X-rays. Roentgen wasn’t just a brilliant scientist, but a large-hearted one. Here are some interesting facts about him that you may or may not have heard of.

Roentgen invented the X-ray accidentally. While working in his lab in 1895, experimenting with cathode rays, he covered one of the tubes with black cardboard in a dark room and fed the cathode ray an electric current. But he forgot to place a screen in front of the tube. As a result, the glowing tube left an impression on a piece of cardboard – and thus was the X-ray born.He called them X-rays because X = unknown. The first “röntgenogram” was of his wife’s hand. 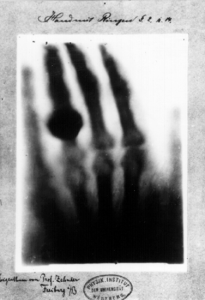 Interestingly, in 1890, five years before Roentgen made his discovery, two professors at the University of Pennsylvania accidentally produced an x-ray with two coins and a photographic plate. But they didn’t remember this until Roentgen became famous! So the USA missed out on this first!

X-rays are not just used to see inside people. In 1979, NASA launched its Chandra X-ray to take images of outer space. The Chandra X-ray Observatory was named after the late Indian-American Nobel laureate astrophysicist Subrahmanyan Chandrasekhar. (Yep, our family is related to him!). This observatory is still in operation and if you visit the NASA, you can see plenty of images.

Some fun facts about X-rays

X-rays are invisible to our eyes, but register on photographic film.

X-rays, besides being used in hospitals by doctors, are also used in airports to check luggage without opening them. In large factories, X-rays are used to check machines and parts for fractures and cracks that may not be visible to the naked eye.

X-rays pass through our body tissues just like light passes through a net curtain. Each type of body tissue allows X-rays through in a different way. While bones are dense and block them, making the film appear white, skin, fat, muscle and blood allow X-rays through and appear black on film.

Stars and galaxies give out X-rays. The first and brightest X-ray source was the star Scorpius X-1 in 1962. Thousands have been found since, but these are weaker. X-ray galaxies are powerful X-ray sources with big black holes and are found outside our galaxy. 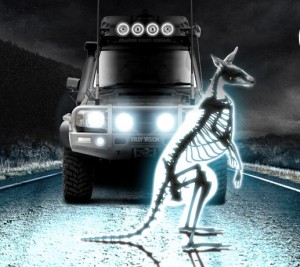 Fascinating, yes? So we know Superman has X-ray vision. Cars already have X-ray vision headlights. And now, I hear that X-ray vision is coming to your cellphone!

Vidya Sury. Happy Mom. Writer. Editor. Blogger. Social media explorer. Collects Smiles. Often accused of being too cheerful for her own good, she hums all the time. Loves music, books, writing, cooking, photography, coffee, DIY, people. Enjoys learning and sharing what she knows. Believes that happiness is a DIY project and that everything is possible. She’s participating in the AtoZ Challenge this year with two blogs – personal blog http://vidyasury.com and her health blog at http://yourmedguide.com