I hope most of you have admired my book covers.  They are mostly down to my wonderful illustrator, Danielle English, with a varying degree of inspirational input from me. I think it was my second or third blog post where I realised I would have to have covers for my books, and they’d have to look good.  I think I did look at what Createspace did for its cover creator (now part of the KDP set-up, too) and quickly realised I could recognise covers set up on that fairly easily.  Nothing wrong with that.  I wanted something that said more about the book (I was thinking of the first three at most, then) and could be replicated in some way to show the books were a series.

I can’t remember who mentioned Dani was finishing her Illustration and Design degree….. 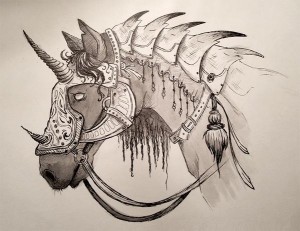 Anyway, I asked her, and told her to do it professionally and charge fees, and so she has, absolutely wonderfully, putting up with my desire for tweaks and changes and sometimes a very firm idea of what I wanted that I was totally inadequate in putting into a design brief.  But now Dani has an engrossing job doing what she’s been trying to get into ever since leaving college, which is games design, and she seems to be doing well with it.  You can follow her work on Twitter @Dannie_62 where she’s been posting wonderful pen & ink sketches during #inktober and also on her website kanizo.co.uk

But I am left without an illustrator.

I’ve been keeping an eye on who does what in what style for my fellow BookElves, and given the established style of the Princelings covers, I think one or two might be able to do something with their flair in my constraints!  But for the Viridian series, and also for some of the editing type things needed for the BookElves Anthology 2 cover, I set about teaching myself what to do.  My old computer held a program very like Photoshop, which I used to do the cover of White Water Landings, which was a collage of photos.  It’s a steep learning curve, working with layers, and different types of layers, but I struggled through and I was pleased with the result.  I had an idea of what I wanted to do, and did it.

I also have an idea of what I want to do for the Viridian series.  The problem comes when I want something unique, something which requires proper drawing skills.  The other problem was using an old program on an old computer, which just wasn’t up to it.

The solution seems to be Gimp, which was recommended by one of the publishing systems I use, possibly Blurb.  It’s a free package, which seems to do far more than I would ever get round to doing, although it still isn’t a full drawing package.

As with learning anything, you have to be ready to throw it away and start again.  I started with the simple task of putting titles on my Viridian System Sampler.  Then The Perihelix could get some titling on a picture using the Cover Creator system, but not how I wanted it, and I also wanted to have a ‘device’ on the front.  I had a vision for The Perihelix, just as I had for Princelings of the East, but the execution was more difficult.

But if you do have some pictures you want to put in place and/or merge, and some titles and text to put over them, you can use Gimp (and probably most photoshop-like packages) to build these things up in layers.  Gimp is free, big, and well-respected. 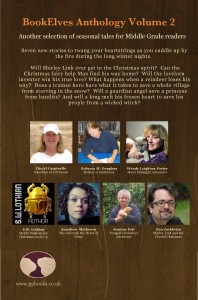 So that’s what I’m doing at present, and I’m most pleased with the back of the BookElves Anthology 2 paperback.  Apart from Dani’s wood-grain which was slightly too small for the paperback version, and her original logo, which sometimes goes in with a transparent border, and sometimes doesn’t, it’s all my own work. (The space bottom right is for the barcode)

But that still leaves me with a problem about things that need drawing.  Fortunately my wonderful editor, Dawn, is an ace with Photoshop, and has done the ‘device’ for the Perihelix.  I’ll do a final cover reveal in December – although I revealed one version last month, and Viridian series website readers will be asked to make a choice tomorrow!