These books take me back a year to my highly enjoyable weekend of Nature Writing, hosted by the incredible Mark Coker and the more reserved Patrick Barkham, as part of the Norwich & Norfolk Festival 2015.  Alas I did nothing so interesting this year, but you can read more about it in this post from last year.

A parting gift from each author was a non-fiction (hardback) book: Mark Coker distributed copies he had been given but would never have time to review as the author or publisher clearly wanted, Patrick Barkham gave us his own Badgerlands.  I finally got around to reading them as part of the Clean Sweep Challenge in May, and I’m really glad I did!  Interestingly, both of these books are by Guardian journalists. 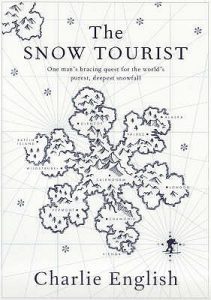 This book’s subtitle is ‘One man’s bracing quest to find the world’s purest, deepest snowfall.’  I’m not sure it came across like that as I was reading it, but it is certainly a quest to discover as much interesting about snow as possible.  Mark picked this brilliantly for me, since it was only about six weeks since I’d returned from the arctic, and do love the odd snowy waste, even if I gave up skiing many years ago.  My love for televised winter sports continues, especially more arcane ones like ski jumping, and the author’s research into the history of skiiing, and the science of snow, really hit the spot for me.

Charlie English takes multiple journeys, often back-to-back, to find out all he can about snow – which is really interesting! He starts in northern Canada, at the wrong time of year, really, and hits the Alps, where he discovers he’s not quite the explorer he maybe used to be. He tries multiple places in the USA that claim to have heavy snowfalls, sometimes the deepest, sometimes the most in a year, and so on.  It seems to be a competitive sport between towns.  He placated the family by taking them on one of those trips, although it didn’t seem too successful a ploy.  I found it interesting that his wife still tolerated his travels even when he was away for the birth of their third child.  Or maybe he was such a wuss about the first two she preferred it that way. 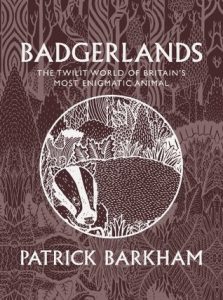 Badgerlands: The Twilight World of Britain’s Most Enigmatic Animal

Patrick Barkham’s quest to really understand the badger and the part he plays in English culture takes him and us to some dark and dangerous places, as well as beautiful crepuscular places deep in the countryside, lyrically described so the moss, cuckoo and scent-marking assault your senses.

Patrick’s writing has a special way of bringing the scene to life with well-observed detail.  I remember the pair of waders in the dusk on the Somerset levels, and the occasional bat, the pinkish soil excavated from the sett, and the details of the mix of wildflowers around the places he sits.  Most of the time he doesn’t see that, as he’s shinned up a tree at dusk, a feat that seems to have become much more difficult now he’s taller.  He has an elegant way of covering all the angles; he manages to interview farmers, rescuers, feeders in their back gardens, road-kill eaters, more farmers, civil servants, vets, and appears to strike an easy relationship with all of them.  Maybe not the badger-baiters, although he covers their trial well, with input from the photographer-witness and the Wildlife Crime Prevention Officer, whose name seems familiar – and yes, it is quite possible that the same policeman covers Birmingham and Norfolk, since both would be classed as Midlands, and I bet there are only three of four in the whole of the UK (It takes over four hours to drive from Birmingham to Norwich).

Most of all, of course, he describes badgers, and the relationships people have with them.  Not relationships badgers have with people, though.  It is definitely one-way traffic, which is for the best, where wild animals are concerned.

He brings a fascinating journalistic approach to every aspect from pre-history and literature to rescued animals and the great badger-cull fiasco of 2012.  Well, he actually finishes with the resurgence of badgers in Norfolk.  And a nice bibliography and an index.

I was reminded by a description an ex-colleague of mine wrote in a paper for a conference, detailing the great Green Deal fiasco of 2012.  It seems our government really was totally incompetent at that time.  Has anyone got any more examples, so dispassionately and factually presented?

PS  We now have our Great Referendum Fiasco.  This blog will be in mourning for the next god knows how many years.  Just warning you.