The prompt from Chuck Wendig for this week is ‘Rebellion’, which is about where I am in planning the Princelings books, at present, although I’m currently re-editing The Perihelix.  This is an excuse for my mind not switching into a third world for a new flash for today.  But I thought this 800 word excerpt from the forthcoming Princelings Book 8, the Princelings of the North (starring Princelings Dylan and Dougall), might amuse you.  I’m tempted to reveal the cover, but… no, not yet.  Have the rear view of Castle Vexstein, one of my #Inktober sketches, instead. 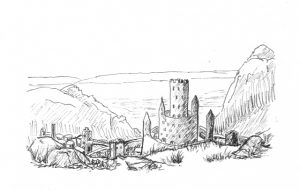 How Not to Start a Rebellion

At the end of the next day they came up to the shoulder of a huge crag and Locksley waved at everybody to get them to crouch down.

“Creep forward until you can see the castle, then stop,” he called in a low voice.

Dylan crept forward, poking his nose through grass until it started to drop away again.  The whole of the Realms seemed to be spread out ahead of him.  Below was a huge castle, huger even than Edin, standing encircled by shacks and hovels, much less well-built than their own in the forest. At one side was a strange-looking building, joined by walkways and with various round towers with no windows in them.  There was something written on the wall in large letters. “Vex Breweries,” whispered Dougall.

Beyond the castle there was a road that wound downhill through some crags on the left, and a huge green field that disappeared over the edge of the world, although Dylan reckoned it was grass all the way down, not cliff.  Beyond there seemed to be gently sloping hills, shrouded in rising mist, and maybe a plain stretching off in the distance until it met the horizon. On the right was a range of cliffs that joined the crags they were on by a narrow ridge.  There were holes in the cliffs at the base of the castle, suggesting tunnels.  They could see a line of people going in, heads bowed, and another coming out, staggering and stumbling.

“They look exhausted,” Dougall said.  “I wonder what they do inside the mountain?”

“It’s rumoured they’re using slave labour,” said Bob, who came up beside them and lay down, looking at the view below. “That’s what the people who joined us yesterday said.  They don’t want to risk going back in.”

“Is Locksley going to free them?” asked Dylan.

“That’s the plan.  You’ve listened to how he rouses people we meet, ones who had given up hope?  We need to do that inside the city now.  Think you could say the things he’s been saying?”

“Yes,” Dylan straightened his back, imagining himself making those wonderful speeches Locksley had made. “Is he not doing it, then?”

“He’ll be doing it, but we need to do it many places at once.”

Dougall nodded in approval.  “They’re too spread out to get the message across quickly, otherwise.”

“Some of the rest of you just need to go in like refugees, but mixing with them and telling them to be ready to fight.  You up for that, Dougall?”

“Good.  Keep watch over the city now, and wait for the signal to go forward.”

They started going through in groups from late morning.  A few people banded together, making sure there were one or two females or youngsters, about eight in a party. Once inside they were to talk to the people, say ‘we should rise up against the guards’, and when Locksley’s horn blew in a day or two, to attack anyone who seemed to be in charge.

Dylan and Dougall approached the gate in the castle wall.  There were six fierce guards there, checking people through.  Most were sent left or right.  The people in front were delivering to the castle itself and were sent around to the back.

“Dylan and Dougall of Castle Haunn.”

Dylan and Dougall got out their IDs.  The guard inspected them.  “How come you got these at Palatine?”

“Our laird hadn’t had the message about them.  The security chief got them sorted for us.  I had a special pass for Edin’s centre of astronomy,” Dougall said, fishing his astronomy card out.

“What’s your business at Castle Vexstein?”

“We’re just visiting really.  Do you have an astronomy tower?”

The guard checked with one of the other guards. “No, but Lord Pogo watches the skies from his observatory. You’d better check in with him.  Go round to the brewery and ask at the gate.”

“Um,” Dylan shifted on his feet.

“All right, thank you.” Dougall was very decisive.  “Come on!”

He turned away and Dylan followed.  This wasn’t the plan.

“What are you doing?” he hissed when they were out of earshot of the gate.  They passed several people they knew from the forest, but continued around the wall to the brewery.

“We’ve been sent here by the guard.  It’s less suspicious if we do as we’re told.  Besides, I don’t like the feel of the castle, and the city around it stinks.”

“You’re not wrong there.” Dylan had imagined himself standing on a table, rallying everyone to his cause, but the smell of the place had terrified him.  “We’ll just have to see if we can rouse the brewery workers.”

#FridayFlash Excerpt | How not to start a rebellion

7 thoughts on “#FridayFlash Excerpt | How not to start a rebellion”