This was a book I got from Net-Galley in November.  I had a few problems with the reading of it on a technical level, but I assume this will have been sorted out by the time it was published.  It might have tipped the balance between a Goodreads 4 and 5 star, though, since I had to struggle at times. 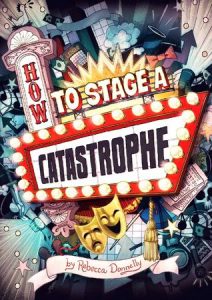 ACT 1: The Juicebox Theatre is about ready for the recycling bin.

ACT 2: Sidney and Folly consider a crime. [You have to read it to see if we commit a crime – that’s called suspense.]

ACT 3: Sidney and Folly save the Juicebox Children’s Theatre! [It’s not giving anything away to tell you that. We just don’t want you to worry.]

Sidney Camazzola plans to be the director of the Juicebox Theater when he grows up. But the theater is in danger of closing, and he and his friends know they need a plan to save it – and fast. Hilarious and heartwarming, the mission to save a failing community theater unites a riotous cast of characters in this offbeat middle-grade novel.

Off-beat is what attracted me to it, and I was delighted with the result.  This cranky and highly enjoyable book features the most delightful drawings and sketches in between the scenes, which are laid out in three Acts, with a play within the play towards the end.  It sounds confusing, but you soon get into the quirkiness of it all.  Sid, who is the would-be director and narrator, is an engaging character with plenty of faults, and a knack for seeing the worst in his sisters, and forgiving his friends, both adult and contemporary.  It’s a marvellous collection of people, who can easily be imagined around anyone’s hometown, I would think.  I can put together the cast from my village, at least!

I sometimes found it hard to follow, since the scene directions tended to merge with the dialogue itself, although it is possible it was a typographical issue.  However, overcoming that was the warmth of the individuals, the craziness of the situation, and the inventiveness of the participants.  The obsession of Sid’s friend Folly with the most wonderful caricature (if that’s not a tautology) of a high-hitting sales-training guru, which was absolutely spot-on, gave me even more giggles since I was exposed to their trickery in the 1990s. So true!

The idea that the kids can rally round and get into all sorts of scrapes while trying to raise money to save their children’s theater is something that will resonate with most young readers.  It’s the first middle-grade novel of Rebecca Connelly, and it’s a tour de force.  I hope her originality keeps flowing.  More please!

Book Review | How to Stage a Catastrophe by Rebecca Donnelly