I’ve been going bats for several years now.  Then I bought a bat detector.

Since then I’ve known roughly which bats I’m batty about – or which are most batty near me, as the case may be.

Bats are easy enough to detect – they fly past in the dark and scare you to bits.  You can’t hear them, you can only vaguely see them, and it’s only by catching them you can determine which species they are.

So only specialists can do that – right?

No, all you need is a bat detector, a guidebook, and somewhere to detect bats.

This is my bat detector – there are many models available. This one is commonly used for amateurs like me who just want an idea of what’s around.  It comes with a manual, which explains how it converts the bat’s ultrasonic noises into audible sounds for human ears.  The manual also guides you through the frequency ranges and types of sound you hear for different species. Of course this is all about UK bats, since that’s where I live. 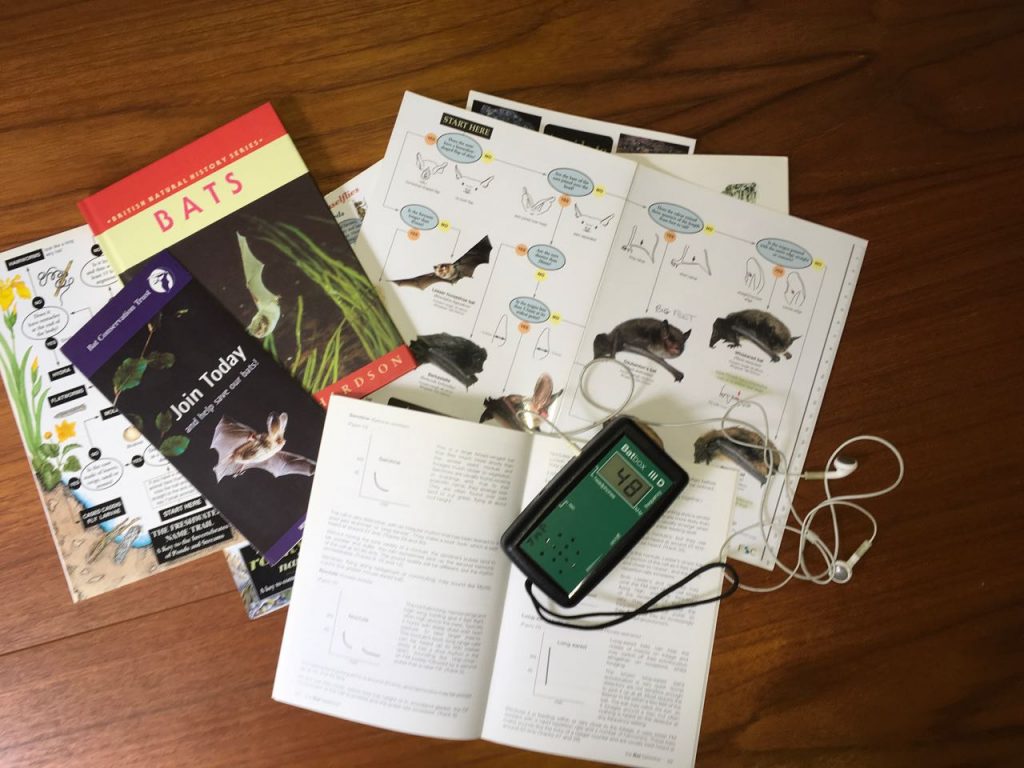 I quickly got the hang of it, and eventually, by trial and error, sorted out some of the bats locally.  I also went on a Field Studies course on bats (as I have on dragonflies and several other subjects).

Apart from my bat detector I have the Field Studies Council ‘Bat key’.  This is a simple guide to identification that they do for a huge range of flora and fauna.  I looked for a guidebook to bats and found it extremely difficult to find one; the one I got is more detailed than I was looking for but contains much of interest about migration, different hang-outs (they change quarters during the year but have regular ‘homes’) and their private lives.

So when I go out detecting bats, I give my memory a brush-up from the detector manual on what ranges to look in and the different sounds of the main bats, and go for a walk around dusk or just after.

I did that last Wednesday.

Trees, edges of fields and water features are the best places to look.  Bats catch insects, many tons a night, and are the farmer’s best friend for getting rid of flying pests.  That’s a very good reason for them to keep hedges and other line features, since bats like their ‘motorways’ to travel from one restaurant to another. If you see a new road in the UK, it’s likely to have several structures like fishing nets strung across to help bats continue along their traditional routes and not swoop low over the road.  Squirrels and mice also use them, but they climb them. 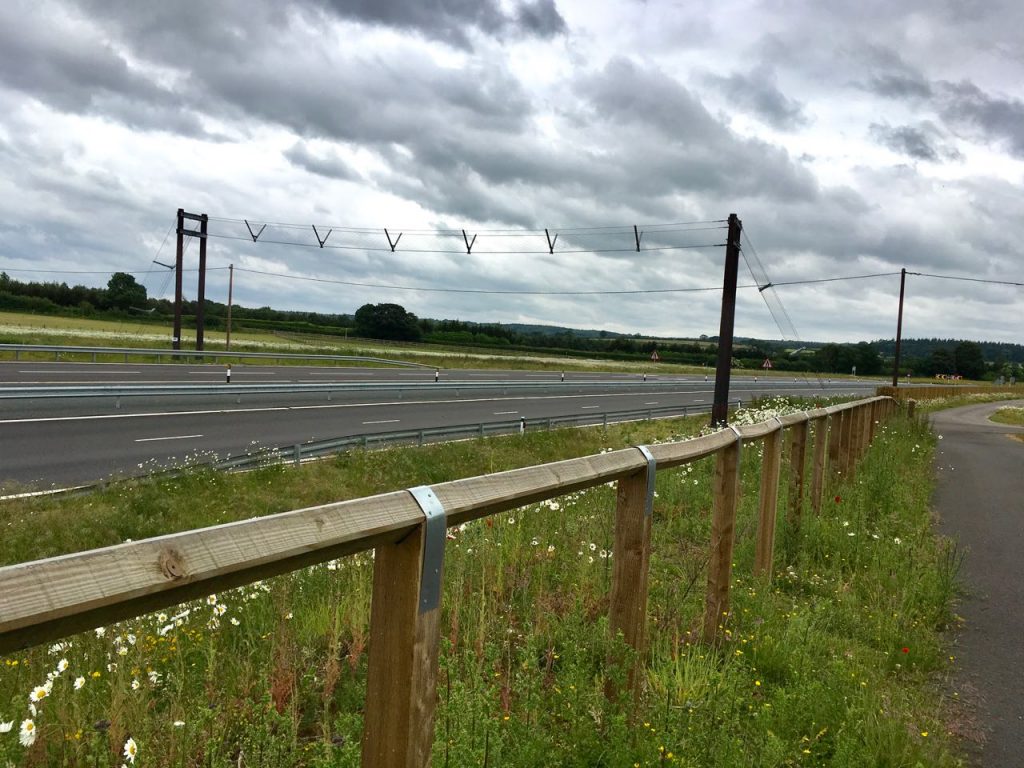 Some bats prefer to hunt around trees, others prefer water.  It’s about insect choice.  My favourite bat, the Daubenton’s, has hairy feet which it drags along the surface of a pond, lake or fairly still stream, fishing for surface insects!

I’m lucky to have trees and water right outside my house, so I take my bat detector, and direct it at the river, and sweep around the rest of the car park and my garden.  Sometimes I walk up to the common, and I discovered a stream of bats (pipistrelles) coming from an old folly in the grounds of a house in the village, which was fun.

The two most common species in Britain are the Pipistrelle, and the Noctule.  The pipistrelle is a tiny bat that is now recognised as coming in two varieties. That has only been determined since we started using bat detectors, since one of them makes its sounds at 45 and the other (called the soprano, for a higher voice) at 55.

I can go out most evenings in summer and find a pipistrelle or two flying about.  I used to have many more than two, but the numbers have declined recently.  Even when I went out last week, there were two sopranos and a common pipistrelle on the river. 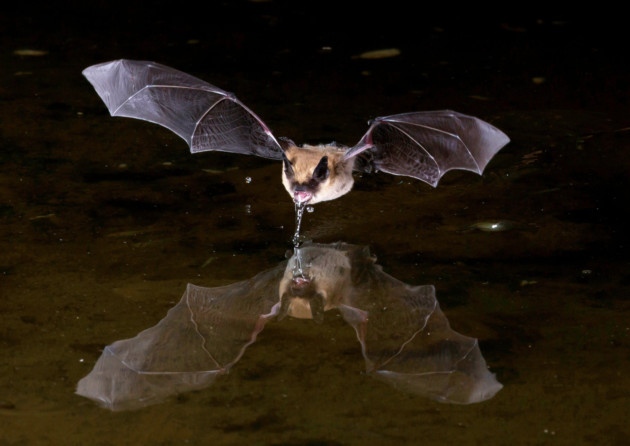 I used to have reliable Daubenton’s on the river, several at any time, and Whiskered bats as well.  That was up to last year.  I’m afraid my neighbours’ obsession with clearing reeds and trees has destroyed most of the habitats that host moths and other flying insects, and last week there were no other bats about at all. This was what I suspected.  I didn’t go bat detecting at all last year for fear of what I would find.

I also used to hear noctule doing their thing flying down the main river or along our tree-bordered dyke.  There’s no real reason for that to have stopped, other than decline in insects, as the main river and dyke are much the same.

A bat in the washing basket

My first close encounter with a bat was at my old home (Epping). One flew in through the open doors late one evening, and up the stairs.  Dazzled by the light at the top it took refuge in the clothes basket waiting to be brought down!  I carefully covered it with a dark cloth and brought it downstairs to release it.

In the light from the kitchen window I took a look at it.  Tiny, the body about the size of my thumb, but its wings spread over the whole of my outspread hand.  I said something to it, and its ears shuddered, and I realised I had just shouted at it!  So I whispered encouraging words to it, and it flew off.

Bat picture from a very nice article on Canal Boat magazine with pictures of the 8 species most likely to be seen from British waterways.

This is part of my June #30DaysWild Challenge.  There’s still time for you to join in!

3 thoughts on “Going Bats – act of random wildness for #30DaysWild”