Bloody Brilliant Women was released on Thursday. I received a pre-release copy from the publishers 4th Estate and William Collins, via NetGalley. The full title is Bloody Brilliant Women: The Pioneers, Revolutionaries and Geniuses Your History Teacher Forgot to Mention. This does rather suggest it can dissolve into rant at times. This book contributes to my non-fiction reading adventure. 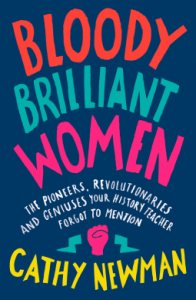 A fresh, opinionated history of all the brilliant women you should have learned about in school but didn’t

In this freewheeling history of modern Britain, Cathy Newman writes about the pioneering women who defied the odds to make careers for themselves and alter the course of modern history; women who achieved what they achieved while dismantling hostile, entrenched views about their place in society. Their role in transforming Britain is fundamental, far greater than has generally been acknowledged, and not just in the arts or education but in fields like medicine, politics, law, engineering and the military….

Were it not for women, significant features of modern Britain like council housing, municipal swimming pools and humane laws relating to property ownership, child custody and divorce wouldn’t exist in quite the same way. Women’s drive and talent for utopian thinking created new social and legislative agendas. The women in these pages blazed a trail from the 1918 Representation of the People Act – which allowed some women to vote – through to Margaret Thatcher’s ousting from Downing Street.

Blending meticulous research with information gleaned from memoirs, diaries, letters, novels and other secondary sources, Bloody Brilliant Women uses the stories of some extraordinary lives to tell the tale of 20th and 21st century Britain. It is a history for women and men. A history for our times. [goodreads]

If your history is occasionally a bit wonky, then you may have trouble placing the events and people in context in this book.  Some of the older historical accounts of women you really should know more about are well framed.  Later it becomes somewhat confusing, and is more an account of what women did in the two world wars than about individuals. The author uses these events to talk more about the trends in feminism and progress towards equality than specific achievements by pioneers and geniuses.

Most of the writing is engaging.  I thoroughly enjoyed the first half, although it is hard to put down partly because it is a large book divided into very few (8) chapters. The post-war descriptions seemed to develop more into a rant on the theme of feminist emancipation. In fact, I felt I was reading something I might have written on something I feel passionate about. Some sections seem like anecdotes illustrating some point without really explaining anything about the women involved (Harold Wilson’s secretary being a prime case in point).

However, the author develops our understanding of the prevailing arguments over the role of women by explaining ‘what women want’ from the several perspectives. Paternalistic politicians, strong-minded well-educated mostly white women, factory workers and miners’ wives, and second generation immigrants.  Well, not so much the last, but she does point out that there is a further racial barrier to be overcome. I want to follow-up references to understand this better. The extensive bibliography will help me look up some of the names that interest me.

The further I read, the more sections I highlighted. Most are in the section on Thatcher. This seemed to be well analysed, or at least it chimes with my own beliefs and understanding.  But then, as she cites from some surveys (MORI): ‘throughout her term as prime minister, middle-aged and older women especially stuck with her, though over time younger women swerved to the left.’ I’ll buy that.

After that I particularly highlighted names I’d like to know more about.

women of our era

Ms Newman finishes with a run-down of women of our current era who are doing great things, whether in business, politics, social and health welfare, science and technology, arts, architecture, writing…  I was pleased she included astronomer Maggie Aderin-Pocock, who was warned off studying science at school…

I think it is an important book, of interest not only to British women, but women in other countries too.  It may even be important enough for me to buy a fully formatted paper based book to keep on my shelf for reference.  It might come in useful to introduce a better balance of quiz questions for my golf club quiz.