Flashback Friday is supposed to happen on Friday but I decided there was too much happening last week. Today is Thursday. I delved back into the archives for January posts and discovered Death By Trombone was launched in January 2016.  I know Rebecca is well on the way to publishing her fourth Pismawallops PTA mystery, so here’s a reminder of the second for you.

It’s the book launch post, with my review.  I’m afraid the Goodreads giveaway is over, so I’ve omitted that!

You can join in Flashback Friday here! 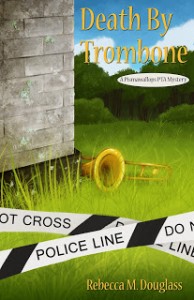 This new book by Rebecca Douglass is the second in her cosy mystery series featuring JJ McGregor and her friends and family on Pismawallops Island, a fictional place off the Washington or Oregon coast.  (I think)

JJ and her friend Kitty run the PTA for the High School, which is why they are busy setting up stuff for an event in the school gym when JJ goes outside for some air, and stumbles across a dead body.

Given her troubles with an acrimonious divorce, concerns about just everything to do with her teenage son, and her own hormones running rampant over the local Chief of Police, dead bodies could be way down the line.

But she has her PTA duty to perform, and she sorts it out, insisting that she will not get involved in the investigation.  Will Not.

Of course, events overtake her, and she enters into a whirlwind of often painful situations, which eventually, with much gossip, red-herring introduction (often by the other locals), and high drama, come to a satisfactory conclusion.  Well, except for the Chief of Police, who needs more work to be concluded.  Not that he isn’t willing, but life’s complicated, you know?

clues do not conveniently pop up

And that is the real strength of Rebecca Douglass’s writing.  Life is complicated.  Mysteries do not solve themselves and clues do not conveniently pop up in front of her.  But they are discovered, through painful investigation, sifting of the facts, watching people’s body language, help from her loved ones, and putting two and two together correctly.  There is no misdirection other than what gossip and lack of evidence can feed into an overactive brain.  And the people are very real, or so it seems to me, since I haven’t got teenage sons and Ms Douglass has.  It’s a good mystery, witty and laugh out loud funny at times, an enjoyable romp and a thrilling action story.

I would recommend Death by Trombone highly to you even if I hadn’t been a beta reader; was not mentioned in the acknowledgements; and Rebecca was not one of my stalwart blog followers and commenters.  I’m going to give it a Goodreads 4 stars because I really really like it.  I think it deserves five on Amazon.

Release day was [yesterday,  January 8 2016]. Orders for signed copies are accepted by email to Rebecca.douglass@ninjalibrarian.com.

Buy Death by Trombone now on Amazon  for the Kindle and Smashwords for all ebook formats.

If you haven’t read the first book, get Death By Ice Cream at Amazon, Smashwords, or Barnes & Noble.

And the covers are by Danielle English.  She’s brilliant, too.

4 thoughts on “#FlashbackFriday | Death by Trombone by Rebecca Douglass”