Death by Pumpkin is the third in N A Granger’s delightful cosy mystery/crime series starring Rhe Brewster.  Regular readers probably know that Noelle Granger is a regular reader.  Despite this, I read and review her books! I bought this one from Amazon at a very reasonable price. 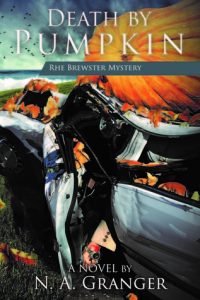 At the annual Pumpkin Festival in the coastal town of Pequod, Maine, Rhe Brewster, an ER nurse and Police Department consultant, responds to screams at the site of the Pumpkin Drop. Racing to the scene, where a one-ton pumpkin was dropped from a crane to crush an old car, Rhe and her brother-in-law, Sam, Pequod’s Chief of Police, discover the car contains the smashed remains of a man’s body.

After the police confirm the death as a homicide, Rhe embarks on a statewide search to identify the victim and find the killer. During the course of the emotional investigation, she survives an attempt on her life at 10,000 feet, endures the trauma of witnessing the murder of an old flame, and escapes an arson attack on her family’s home. There is clearly a sociopath on the loose who is gunning for Rhe and leaving bodies behind. With Sam unable to offer his usual support due to an election recall and a needy new girlfriend, Rhe realizes that the only way to stop the insanity is to risk it all and play the killer’s game.

Maine’s most tenacious sleuth is back, this time to confront a menace that threatens to destroy her life and those closest to her. The latest installment of the Rhe Brewster Mystery Series, Death by Pumpkin, is a murder mystery and thriller that tests the limits of Rhe’s strength and resolve like never before.

This is another action-packed story with Rhe (pronounced Ree) on the trail of a murderer.  This time it’s legitimately, since she works for the police department in her ‘spare’ time.  The blurb outlines the story, but the details and the emotional twists and turns are the author’s forte.  This is just as well as, in truth, the murder is pretty well wrapped up early; the main suspect is never in doubt.  I wondered whether that was really wise, but this story is really more about Rhe’s well-being than the murder mystery.

It is definitely wise to read this third book reasonably close to the second. The events of that bear considerably on the real tension in Death by Pumpkin.  The excellently choreographed characters run rings around each other, sometimes one party is ahead of the game, sometimes the reader is.  I tended to tell Rhe off for putting herself in danger needlessly in the other books; this time she seems determined to put herself in danger for entrapment.  Maybe I read too much into this.

It does lean heavily on previous events, with a great deal of effort put into Sam’s challenge for his job (and therefore an election – which funnily enough was a mechanism used in Tonya Kappes Southern Fried, too).  There is a lot going on in this book which is not about the death by pumpkin. It’s more about revenge, and I felt it was not so much a cosy mystery as a serial suspense.  And I must admit I didn’t enjoy Rhe’s long-drawn-out reaction to that.

Call me picky, but I didn’t find it as satisfying as the others.  Then again, the others (Death in a Red Canvas Chair, and Death in a Dacron Sail) were deeply satisfying.  It won’t stop me avidly anticipating the next Rhe Brewster adventure.

Book Review | Death By Pumpkin by N A Granger