So this is the last hurrah of 2017, and I thought I’d round up the few books I’ve read recently and remind you to vote for my Book of the Year, which I’m extending to Jan 14th, and announcing on Jan 15th in that giveaway.

The last few weeks of the year were ones where I did little reading, and a huge amount of it.  The huge amounts were on editing and final edits and re-edits to The Princelings of the North in its three forms, Kindle, Smashwords and paperback.  Alongside that I was beta-reading Rebecca Douglass’s Death by Adverb v3, and I can tell you you’re in for a treat when she is finally satisfied with it.  I think she has a launch date in mind, but I’ll leave that for her to announce.

As a result of that plus reviewing the net-galley books I needed to review for December, I failed to meet one of my Reading Challenges.  No prizes for guessing which. Yes – the Mount TBR Challenge. Although I was in the end only four short of the third level.

I’ve decided to start the new year with a blank sheet of reviews – I often have some ‘hanging’.  I haven’t finished Science and Islam, which is my final challenge book of the year, but I will have done by New Years day, so that will be allowed to start the year.  What I’m going to try to do is review more books that I think my readers will enjoy, not just those I’ve picked 🙂

So, to round up those I’ve not featured already: 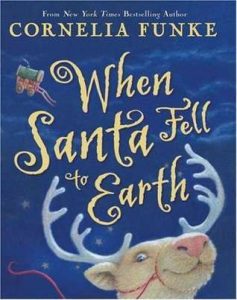 When Santa Fell to Earth

What would happen if Santa fell to Earth? Christmas through the eyes of Cornelia Funke: quirky, funny, ultimately heartwarming, and packaged in a collectible format. A new holiday classic!
Scared by a storm, Twinklestar, the least reliable reindeer, bolts–causing Santa and his sleigh to crash-land. And though Santa has dropped into a friendly neighborhood, he’s not safe: Jeremiah Goblynch, the ruthless new leader of the Council of Yuleland, is determind to put an end to children’s wishes and turn the holiday season into his own personal moneymaking scheme. As the last REAL St. Nick around, only Santa stands between Goblynch and his grinchlike plan. With the help and hope of kids Charlotte and Ben, Santa must face Goblynch and his Nutcracker goons to save Christmas! [Goodreads]

This was a fun read and didn’t take me very long – three sessions as I couldn’t stop reading in the third one! I enjoyed just about everything about it. It was gentle on the soul, didn’t have too many nasty people in it, and the bad santa was scary enough for me. I think you have to be careful just how much danger a real santa could be in when writing for lower end of MG, after all. (I found Cornelia Funke’s other books really scary at times). There were lots of lovely touches in it, especially the decorations and methods for delivering his magic.

It was a GMGR Book of the Month that I got from the library – and one worth treasuring.  I suspect those in the right age group would welcome it as a reread every year! 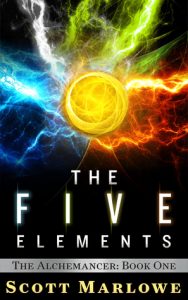 Aaron—scholar, alchemist, and sorcerer’s apprentice—wants nothing more than to study his tomes, perform his experiments, and spend time with his closest friend, Shanna. Substitute the occasional romp about the city for the books and plenty of games of crutchit for the smelly alchemicals, and Shanna is just fine with that, too. (lots more) [Goodreads]

This is a very promising series but while I got stuck into it at first, the pressures of editing made me leave it aside for a while.  One of the first things I saw when I picked it up again was incorrect use of a word (ménage instead of mélange). That added to my discomfort in the continuation of dark, damp tunnels and lost wanderings under the treat of imminent flood.  It seems otherwise well-written, if a bit over-descriptive of the awfulness of the situation, and I wanted something to happen other than more water.  So I’m afraid I abandoned it. But as I own a kindle copy, I might go back to it, on a sunny summer’s day in the garden, rather than a dull, dank, dark midwinter’s night.

Yes, I read this one, many times. At least four times in December. There are certain places that if I start reading, I want to continue.  I always think that’s a good sign. I think it’s my best since Lost City. Then again, I always say that. 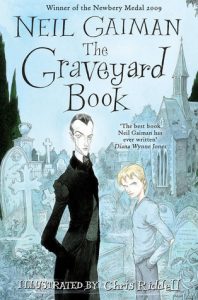 Nobody Owens, known to his friends as Bod, is a normal boy. He would be completely normal if he didn’t live in a graveyard, being raised and educated by ghosts.

There are dangers and adventures for Bod in the graveyard. But it is in the land of the living that real danger lurks for it is there that the man Jack lives and he has already killed Bod’s family.[Goodreads]

I started with doubts; I finished with love and sadness, and much too soon.

This book really deserves its own review page, but I read it for the GMGR book for November, and this is late enough. Neil Gaiman is growing on me.  I really enjoyed this one, particularly his beautifully atmospheric descriptions, which I remember particularly because I felt my editor was taking out too many of my attempted atmospheric descriptions.  I began to feel that I would love to write like Neil Gaiman. It’s odd, really, because I don’t remember being so enthused by Stardust, which appears to be the only other one of his I’ve read. Heaven knows there are enough of his to read – and I’ve only one other on my To-read list.

Anyway, if you haven’t read the Graveyard book, I recommend it.  Very Highly. (5 stars) 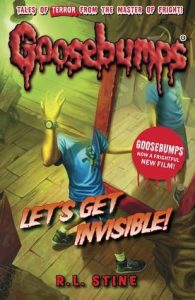 On Max’s birthday, he finds a kind of magic mirror in the attic. It can make make him become invisible. So Max and his friends start playing “now you see me, now you don’t.” Then Max realizes that he’s losing control. Staying invisible a little too long. Having a harder and harder time coming back. Getting invisible is turning into a very dangerous game. The next time Max gets invisible, will it be…forever? [Goodreads]

I’d heard of the Goosebumps series, but thought it might be too scary for me.  It almost is, but it’s hugely popular. I spotted it in my library around Halloween time, and realised I needed an L for my MG a to Z challenge. I’m glad I read it. It’s a great story, well written, very scary, and ends with a twist. I don’t think it quite meets the guidelines for scariness for MG, because the scariness stays with you…. Enjoy!

I hope you enjoyed this round up of books I’ve read in 2017.  You can still vote for my Book of the Year – last time I checked it was neck and neck between two of them.

I wish you health and happiness in 2018.  I hope you keep some of your resolutions, especially if they involve being kind to people and animals, looking after your physical and mental well-being, and avoiding all the nonsense going on in the world that can make you seriously depressed.  The more I read about history, the more I think we are at the end of an empire.  Let’s see if we can make a more civilised one next.