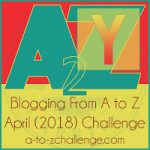 The Yellow Admiral is the eighteenth book of the Aubrey-Maturin series.  These are the books on which the film Master and Commander: The Far Side of the World was based.  The sequel was never made because, despite worldwide popularity, box-office in the US was lacking.  I was desolate.

I decided to reread the Yellow Admiral because I needed a book beginning with Y for the A to Z Challenge today (and for my Alphabet Soup Challenge). It is the only Y book I own, and even on my kindle, there were no Y titles I hadn’t read.  But I also wanted something that gave me inspiration for my own writing (this year’s A to Z theme).  Surprisingly, I found it. 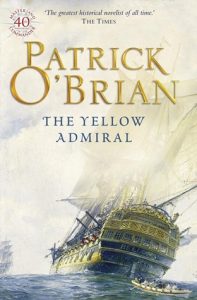 Captain Jack Aubrey is a brilliant sea captain, a hero of the Royal Navy at the start of the 19th century.  Napoleon is fighting everyone, and what Richard Sharpe does on land, Jack Aubrey does at sea. He is aided by several regular crewmen, and occasionally a wife and other relatives. They are generally left at home, a place Aubrey realises he needs, but frankly is never at home on land.  His regular friend is Steven Maturin, whom he engaged as a ship’s surgeon. Steven is so much more: naturalist, philosopher, musician, republican and spy.

The heavy engagement in ships’ jargon, necessary for the story, as well first-class action writing, gave O’Brian as a solid reputation for his work among many men, although it does put others off. But O’Brian gained hordes of women readers through his writing of these characters, with their strengths and weaknesses, and the excitement of their predicaments (and troubled romantic entanglements).

This book falls into the gap between more exciting actions and clearer threats.  It is largely about political manoeuvrings; the shadow is hanging over Aubrey’s career that he might never be made a ‘proper’ admiral, and be left languishing without a ship as a half-pay ‘yellow admiral’.  Aubrey’s behaviour on land often does him no favours among the upper classes who could promote him.  There are short stretches of tedious naval operations: tedious for the naval personnel, that is – O’Brian manages to fill it with intrigue and the tension of sailing in bad weather. There are long stretches of things going wrong at home, never to be put right since orders always arrive before anything gets sorted out.

It’s a really good study of life at this time, in fact.

But compared to the other books, it’s one of the less engaging. Not as bad as the earlier one where Aubrey gets thrown into the debtors prison, though. It has a great place in the series, and demonstrates the depth of characterisation that O’Brian gives all of the regulars, contrary lot that they are.

Start with the first book, and I’m sure you’ll be gripped all the way through the first ten.  After that, you’ll either love them or hate them.

A long passage at the start of chapter five reminded me why I was featuring this as an inspiration.  O’Brian writes the sea beautifully.  Storm, fog, waves crashing over the ships, and the effect on the sailors, the rigging, the various parts of a ship that he has the courtesy to point out on a diagram at the start of each volume.  I wonder whether I could have written my second book The Princelings and the Pirates if I hadn’t read this.

Writing waves is even more difficult than painting them. A few decades ago, I wanted to do a seascape. Once I’d copied a few, I felt I understood waves a bit better, and made a good job of a seascape or two when on holidays. Writing waves is no different.  You almost need to copy someone to see how the waves work in words before you can be let loose to write your own. My style is different: O’Brian uses a more classic style omniscient third person and more descriptive, I tend to show how the person feels when the storm is doing horrible things to any horizon he can see.

I also use wooden ships, sailing ships in my stories. I haven’t sailed in the English Channel, and I haven’t experienced really bad weather in a wooden ship, so I’m using other writers’ experiences to help me. I’d like to thank them all (including the round-the-world yachtsmen and women).

The Princelings and the Pirates is not my only sea story.  This is a passage from Bravo Victor, a book that really clarifies some loose ends. Reading this after the Kenneth Grahame extract the other week, I think I could do better. There will be more ship scenes in the last two books.  I’m looking forward to writing those!

The westerly gale hit the little racing yacht as it got out of the big bay and passed the small islands near the continental coast.

“We could take shelter there,” called one of the crew.

“Too treacherous,” Charlie shouted back. “Shallow and rocky!”

He gave order to reef all sails, take in the mizzen sail, and run on jib and a storm sail north to the shelter of Dimerie.

Far to the west, Mariusz’s ship also battened down the hatches and pulled in most of its sails.The few passengers strapped themselves into the bunks as instructed and prepared to die. Mariusz hugged his bundle of shares and wondered if this was divine justice.

Both vessels tossed and turned, shipped water and bailed it out again. But these were sound vessels, and they weathered the storm just as they were supposed to, although Charlie had to hack a broken boom in half and re-rig the sail in order to limp into a harbour.

Further east, a small ship that had enjoyed considerable success smuggling goods was caught in the gale as it swept through the Channel. The wind blew them onto the headland just five miles from their home port and smashed the boat on the rocks. Most of the crew managed to swim or float ashore, but the ship was lost.

Y is for The Yellow Admiral #AtoZChallenge2018 Book Review