Revelation Space was the December book of the month for the Space Opera Group on Goodreads.  Yes, I’m a bit late reading it, due to my library not stocking it, even thought they had the second in the series in.  So Mr Reynolds, your library sale is down to me! It took me nearly a month to read, so it’s earned its place on my SpaceTime Reading Challenge list! 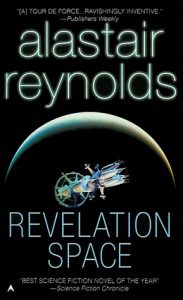 Nine hundred thousand years ago, something annihilated the Amarantin civilization just as it was on the verge of discovering space flight. Now one scientist, Dan Sylveste, will stop at nothing to solve the Amarantin riddle before ancient history repeats itself. With no other resources at his disposal, Sylveste forges a dangerous alliance with the cyborg crew of the starship Nostalgia for Infinity. But as he closes in on the secret, a killer closes in on him. Because the Amarantin were destroyed for a reason — and if that reason is uncovered, the universe—and reality itself — could be irrecoverably altered…. [goodreads]

Since I jumped through a few hoops to get Revelation Space added to my library, I was determined to do it justice. But I have to admit, I found it heavy going. There is a lot of it, in quite a blocky layout, which takes some effort to read. There are a lot of long, often unfamiliar words.

Halfway through I thought it reminded me of some of the more technical science papers I’ve read. This is not that surprising, as the author is a respected astrophysicist formerly employed at the European Space Agency.  So all his wisdom of space science—and interest in others—fills these pages. Whether his ideas are based on current theoretical physics, or just imagination, I don’t know.  As you remember, I finally read Hawking’s Brief History of Time last year.  If you can keep up with that, then this is probably okay for you.  War and Peace is another good comparison. And Bring Up the Bodies.

The story is convoluted and exciting (when not into detailed descriptions of the bio/technology). At first we don’t know whether the main protagonists have anything to do with each other. Of course the plot is well planned: the author introduces nothing unless for a reason. The technologies, both space and personal (very personal, we’re talking implants) are fully realised. The characters are as human as their non-human aspects allow them to be. Humanity has evolved, and indeed much of the book is concerned with intelligent lifeforms who existed a million years before humans came on the scene. I think most of the current inhabitants of the planets were human, save for the genetic manipulation that had gone on. I’m not quite sure if the same can be said of the ship-based lifeforms.

I admire Dr Reynolds’ resistance to the ploy of lesser scifi authors to allow (physically impossible) faster than light travel, thus getting over the time dilation effects of relativity. The result is the requirement for sleepercraft, where most people sleep away the long interstellar distances. Trade happens in a hopeful manner, in that traders hope what they have will be worth trading when they arrive at their destination. After all, they set out for a thirty year journey on the basis of information already thirty years old. The ultimate destination, and the reasons for it, get really convoluted. Who is really who gets confusing. If your mind is boggled by now, don’t read this book.  If it isn’t you’ll probably enjoy it.

Musing on the concepts

It’s a series. Will I read the next one? Maybe, next time I have a reading window that’s long enough to accommodate War and Peace again.  But then again, I suspect in a couple of months I’ll still be musing on the concepts in this book, and itching to get back to this amazingly complex, futuristic, and science-based world.  Kudos to Dr Reynolds.  It may be a masterpiece.

amazingly complex, futuristic, and science-based world. Kudos to Dr Reynolds. It may be a masterpiece. #scifi #spaceopera #hightech Click To Tweet

PS: While I was checking whether to call the author Dr or Mr, I found this interesting interview… and wanted to bookmark the last paragraph.

One thought on “Book Review | Revelation Space by Alastair Reynolds”